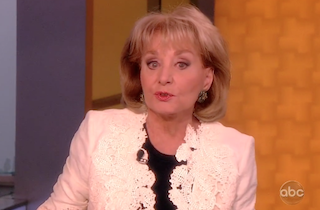 Barbara Walters gave a big interview to Variety about her impending exit from The View and the prospect of getting a follow-up talk with one of her most famous interviewees of all time. The piece includes well-wished from people like Diane Sawyer, Star Jones, and Larry King, with some of them saying it’s unlikely Walters will just go away into the sunset and not come back to do any more work for ABC.

Walters herself doesn’t rule out the possibility either. She says, “If the president came on, depending on the circumstances, I might come back. If Fidel Castro said I will do an interview with you, which he has not in 25 years, I would go off and do it.”

Walters dismissed the idea The View is in much competition with CBS’ The Talk, though she did remark, “The only thing I’ll say is if you’re married to the president of the network, you get more promos.” But with Joy Behar and Elisabeth Hasselbeck gone from the show, there’s a question of whether The View is shying away from politics. Walters explains what they’re planning for after she leaves, adding that the show needs a new conservative voice with Hasselbeck’s recent departure.

“We’re experimenting a little bit,” she says. “Sometimes we think we should add a man.” And it looks like “The View” will hire another right-leaning personality to keep those Hot Topics segments heated. “We need a conservative voice,” Walters says. “We do try to present a different side.”

And with Walters’ retirement coming up very soon, that just leaves the question of which big interviews she might secure before she leaves. Walters reveals she would like to talk to none other than Monica Lewinsky again, saying, “I think Monica’s story is very interesting, because everybody else has been able to move on. I’m touched by the fact that she hasn’t been able to.”