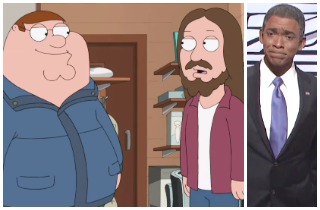 Glenn Beck is really angry with Family Guy for its latest episode, “The 2000-Year-Old Virgin,” in which Peter Griffin tries to help Jesus get laid for his birthday.

Beck said that’s not courageous satire because “it is not brave to do the things that the elite and the powerful agree with.”

He was absolutely offended at how Family Guy (a show known for pushing every single boundary possible regardless of taste) “made Jesus a joke.” And Beck actually went so far as to say this might be on par with taking Jesus and recrucifying him before the eyes of a gawking public:

At one point, Beck took a detour to also rip into the cast of Saturday Night Live for being “the biggest group of pussies on the planet.” He said they don’t try anything brave with their political satire to stick it to people in power.

In fairness to SNL, they did have a cold open several weeks ago targeting President Obama‘s executive actions, which was well-received by some conservatives.

And you can watch a clip from the Family Guy episode here, via Fox: