Ben Affleck And The Disease Of ‘Feel-Good Limousine Liberalism’

Ben Affleck And The Disease Of ‘Feel-Good Limousine Liberalism’ 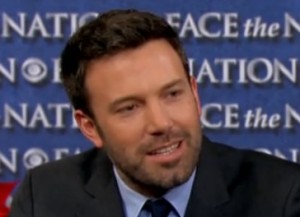 On Monday, Ben Affleck, actor, director, and producer, announced he will join a campaign to fight poverty in the Eastern Congo by living on less than $1.50 a day.

One isn’t sure whether to laugh, cry, or scream.

To be sure, Affleck’s pledge of living on less than $1.50 will only be for the requisite five days (after all, let’s not get crazy now!) and, naturally, he will still drive around one of his several luxurious cars and sleep in one of his luxurious homes, all during this five-day ‘poverty’ pledge.

But, you ask, ‘Why be so cynical, Delgado? At least he’s doing his part to get awareness out there about this charity!’

Ahh, it’s the ‘doing his part’ where I get stuck. Is Affleck truly ‘doing his part’? How? When? Did I miss it? Affleck’s net worth is estimated at a whopping $65 million — he and his wife, Jennifer Garner, have a combined net worth of $100 million.

And yet here he is, shaking his tin can in our faces, urging us to live on $1.50 for five days to benefit the Eastern Congo.

This, folks, is the essence of the ‘feel-good limousine liberalism’ rampant today. From Bono to Oprah, from Affleck to Streisand, we are inundated with celebrities who preach selflessness and charity in public yet clutch their purse strings in private. But I understand, Ben: I know it feels euphoric to go home to your sprawling mansion and think that, with your $1.50-living for five days, and a quick tweet about it, you’ve done your part. It’s a ridiculously tiny act that helps you sleep at night on those 600-thread-count pillows, knowing a child in Africa has no water.

Living in New York, I encountered such ‘feel good liberals’ to an irritating degree. Millionaire friends would write a $5,000 check to a charity (usually a trendy charity – one for the arts or such), attend a glamorous benefit where they get to dress up and drink (hence getting as much out of the ‘act’ as they gave), and pat themselves on the way home, content and satisfied they’d done their part for humanity until next ‘gala’ season.

Yet they — and Ben — have done nothing. In fact, their very wealth, whilst claiming to be concerned about the plights of the downtrodden, is a glaring contradiction.

Make no mistake, though: as a conservative, I have no problem with Ben Affleck hoarding his money as he does. Heck, he can roll around in a bed full of cash, ala Demi Moore in Indecent Proposal, and I’ll root him on. It’s yo’ paper, brother — enjoy it. Here’s the catch, though: you can’t have it both ways. If you are going to rake in and keep millions annually, you simply cannot also pretend to care about plights that can be directly solved, or at least temporarily ameliorated, through financial donations.

So Ben: How about, instead of your silly five-day pledge and your self-aggrandizing tweet, you write a big ole’ check instead? Will it solve the problem? Not permanently, but I can guarantee you some mouths will be fed and some lives in the Congo would be changed instantly. C’mon, isn’t giving up just one of your Range Rovers worth a few kids’ lives? You sit on millions in the bank and yet, typical limousine liberal, with a straight face you purport to care about poverty, poverty you could address in seconds with a single check. How about at least a compromise: donating a chunk of your income (not even a majority!), ala Mitt Romney‘s 30%, to this Eastern Congo endeavor? He-llo? Why do I hear crickets, Ben?

But maybe I’m just being a cynic. After all, even Marie Antoinette threw a scrap of old bread to a starving child every now and then as her carriage passed on the way to Versailles. And that was about as earnest and effective an act as your own five-day pledge, Ben. So never mind. Carry on and best of luck with your pledge. After all, why should your blatant hypocrisy stop you from ‘feeling good’?