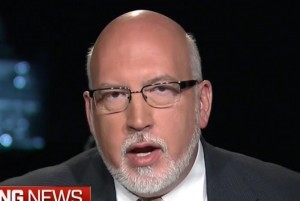 Democratic presidential candidate and independent Vermont Senator Bernie Sanders is getting all kinds of fallout from his interview with the New York Daily News editorial board, including harsh attacks from the paper over his support for a law that gave gun manufacturers immunity from lawsuits. On MSNBC Tuesday night, Sanders campaign manager Jeff Weaver tried to deflect that heat away from his candidate by misleading, obfuscating, and outright lying to Rachel Maddow:

This issue of guns certainly is an issue that the Secretary’s campaign likes to raise a lot, but the truth of the matter is she’s been all over the map on this over the years. Her current campaign takes money from the gun lobby. You know, a gun lobbyist actually ran a fundraiser for her in DC on the 21st of March. So it’s a little bit disingenuous again. It’s like Wall Street or the fossil fuel industry or what have you, they say one thing, but they’re taking money with the other hand.

Let’s just break that down. On Sanders’ support for the immunity provision, he has said over and over again that he doesn’t think gun manufacturers ought to be liable for legally-purchased guns, even during Monday’s interview. In that NYDN interview, Sanders was asked if he thinks that victims of crimes should be able to sue gun manufacturers, and he replied “No, I don’t.” He muddied the waters later in the interview, though, when he was asked if the Sandy Hook lawsuit is “baseless,” and he said “It’s not baseless. I wouldn’t use that word,” but added that “it’s a backdoor way” of achieving the goal of a legislative assault weapons ban.

Whatever help you think that context was to him, Sanders clearly says “No, I don’t” when asked if gun manufacturers should be subject to liability. Weaver’s disclaimers are smoke and mirrors, since a gun manufacturer would never be in a position to sell directly to a “bad actor.”

As for Hillary, it is true that she has “evolved” on guns over the years. In 2008, she attacked then-Senator Obama on the Second Amendment, and said she doesn’t favor “blanket rules” by the federal government on gun control. However, it is an outright lie to say that Hillary’s campaign “takes money from the gun lobby,” or that “a gun lobbyist actually ran a fundraiser for her in DC on the 21st of March.”

What Weaver is referring to is a fundraiser that was co-hosted by John Podesta and Jeff Forbes, who is a lobbyist whose former clients include the NRA, but for whom his firm stopped lobbying in December. It might not seem like a huge lie, but it is most definitely a deliberate one, one which Hillary’s opponents have been telling for awhile. It takes no time or effort at all to say “former lobbyist,” but that distinction is obviously large enough for the Sanders campaign not to want to make it, just as their rolling fossil fuel industry attacks always wind up with a mess of asterisks next to them.