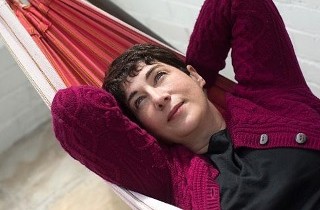 If you’ve ever wondered what female authors face in the book publishing industry bestselling author Joanne Harris has some insight and offered it up in the form of her #TenTweets series. Harris has written novels for a variety of genres including fantasy, psychological thriller, and her Chocolat trilogy, which inspired the movie of the same name, so she has some familiarity with the business.

But to this day, she is still surprised about the sexism she has to put up with from industry insiders and the media. Like how people can’t stop asking her, but not her male colleagues, about Fifty Shades of Grey:

9. (a) Last time I toured in the US, every interviewer I met asked me what I thought of FIFTY SHADES OF GREY. #TenTweets

9. (b) I happened to be travelling with a male writer, who spoke to the same interviewers on the same shows. NO-ONE asked him. #TenTweets

Because people assume that since Harris and E.L. James are both women that they’re in a secret all-lady-author book club? “Hey, you have a ‘gina, I have a ‘gina! Let’s read each other’s books!”

Little known fact: When women write things, we include an impossibly subtle subliminal message, like a dog whistle (you know, for our bitchez), in between every word that only certain levels of estrogen can detect. And that’s why men “never read” books by women — they physically can’t.

Apparently, publishers think this is a true fact that extends not just to female authors, but to their “female audiences.”

3. Later, my publisher tried to put a pink jacket on a book with an almost all-male cast, "so as not to alienate your readers." #TenTweets

But then there’s old “how do you do it all” chestnut wherein a woman is asked about how she balances her family with her career, something that men are rarely if ever asked about because there is no such thing as fathers with jobs:

10 (b): Another was: "How do you juggle motherhood and writing?" I rest my case, M'Lud. #TenTweets

She explains further in a response to someone who questioned that:

.@Rudesreview @kevmcveigh Because no man in publishing is ever described as "juggling" anything. His work is art. Women's work is a hobby.

In case you’re curious, here is the tweet that preceded the one above:

10. (a) I just did an online interview for a foreign magazine. One of the questions was: "Aren't you afraid of getting fat?" #TenTweets

Charming. I guess male authors who write about food don’t have to worry about things like this because no one asks them about their weight either. Not even when their books are about food:

But really, there is no sexism in book publishing. Nope. That’s totally not why female authors sometimes hide behind gender-neutral pen names.