Bill Ayers: Obama Presidency Gets ‘Failing Grade,’ He Should Be Tried For ‘War Crimes’ 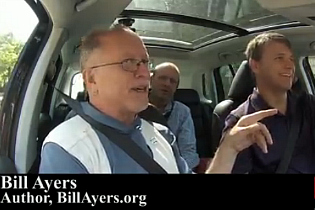 Bill Ayers believes President Obama gets a “failing grade” for his presidency, and should be tried for “war crimes,” along with all living presidents who have engaged in acts of “terrorism” abroad.

Sitting down for an episode of RealClearPolitics’ “Morning Commute,” Ayers told host Charlie Stone that, on policy, Obama receives a “failing grade” along with the “F-minuses” he’s given previous presidents like George W. Bush and Richard Nixon.

“I don’t think he’s let anybody down,” Ayers added, pointing to how during the 2008 presidential campaign then-Senator Obama consistently declared himself to be a “middle-of-the-road, pragmatic politician.” Ayers also described his favorable opinion of Obama’s personality and the fact that he is “interested” and spends a lot of time reading.

Stone pointed out that Ayers views presidents like Lyndon B. Johnson, Nixon, and Bush “with disdain” for their “terrorist” actions, and then asked whether Obama is on that same level for his executive use of drone strikes abroad.

“Do you think Barack Obama should be put on trial for war crimes?” Stone asked.

“Absolutely,” the activist answered. “Every president in this century should be on trial for war crimes. Every one of them goes into an office dripping with blood.”

During the 2008 presidential campaign, Obama’s alleged contacts with Ayers became a source of controversy, with the Republican ticket focusing a great deal on Ayers’ past association with the violent Weather Underground organization during the Vietnam War. Though the media found no serious connection between Ayers and Obama, many conservative outlets took the tenuous connection to be a demonstration of the president’s “radical” beliefs.

Watch below, via RealClearPolitics: