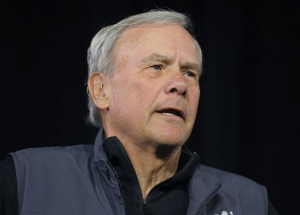 Recently, MSNBC host Chris Matthews had quite a tense segment with RNC Chair Reince Priebus, during which he accused Republicans of “playing the race card.” In particular, he pointed to Mitt Romney‘s joke about never having been asked for his birth certificate. In a blog post, Bill Maher lauded Matthews’ taking on Priebus, while arguing that the likes of Tom Brokaw encourage birtherism.

While Matthews launched into a vehement disagreement with Priebus, Maher said, Brokaw “chimed in that he disagreed with Chris, and thought it was just an “awkward joke,” adding that Republican leaders should have corrected the record when people started calling Obama a Muslim and a socialist, but ‘both sides’ do it.”

Calling out Brokaw’s “bullshit,” Maher said it’s different because half of Democrats don’t believe Romney was born in a different country. “That was the whole point of Romney’s ‘joke,’ wasn’t it?” Maher asked. “‘Nobody’s ever asked to see my birth certificate’ — yeah, because you’re a white guy, you dipshit, and you’re not the victim of that kind of racism.”

How did we get to the point, he asked, where half of Republican primary voters believed President Barack Obama wasn’t born in this country? “It wasn’t just the silence of Republican leaders, it was the failure of people like Tom Brokaw to just dismiss it as racism from the beginning,” Maher asserted, adding:

People like him are always championing “balance” over objectivity. They have to bring everything back to a discussion about how “both sides” are guilty, instead of doing his job as a referee. If every single journalist just simply labeled birtherism what it obviously is — racism — the cancer wouldn’t have infected half the party.