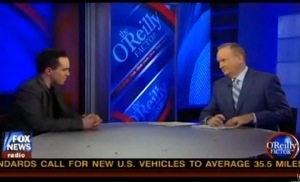 Earlier this week, conservative activist Jason Mattera released a video of him ambushing Senator Al Franken, ostensibly to ask him about problems he had with the health care bill. But Mattera revealed that he was more interested in creating a cheap and sophomoric stunt than conducting a serious interview, as he never really gave Franken the courtesy to respond (and at one point called him “Senator Smalley”.) Bill O’Reilly invited Mattera on his show last night, and didn’t really hide his contempt for the young video producer. That’s right: Bill O’Reilly was siding with Al Franken. (No, that is NOT an April Fools joke!)

In a rather famous New Yorker profile, writer Nicholas Lemman compared O’Reilly to that classic trope of the Irish beat cop:

He’s the beat cop for the American neighborhood, who may have been a little excessive at times, may occasionally have run afoul of Internal Affairs, but law-abiding folks trust him because they know he’s on their side. His liberal guests are like suspects he’s pulled over: in the end, he’s probably just going to frisk them and let them go with a genial warning, but if they try anything, well, he carries a nightstick for a reason.

Watching the video below, one gets the feeling that O’Reilly really just wants to slap the self-satisfied smirk of the this young punks mug (and he’s most likely not alone.)

Now, I only use the term “ambush interview” because that’s what people call an unplanned, impromptu on-camera exchange. I have absolutely no problem with the so-called “ambush interview,” as I’ve said before. For a journalist with a smaller outlet, or no outlet, it can be the only way to get any interviews at all.

I also have no problem with interrupting a subject who is evading or deflecting my questions.

Mattera wastes a golden opportunity here, as Franken actually sticks around and tries to answer Mattera. The problem is that Mattera’s not at all interested in getting answers to his questions, because his questions are complete crap. He’s done this before. He will take a doltish misreading of some sliver of legislation, hassle some legislator on camera about it, then enjoy the high-fives and dull exclamations of “Heh-heh. You said Senator Smalley” from his toadies.

Oddly, that is almost exactly the point that Bill O’Reilly makes to Mattera. He blew a golden opportunity because he was too interested in his own schtick, and revealed that he wasn’t really interested in what the sitting U.S. Senator had to say. Forget the renegade journalism – that’s just downright disrespectful.

In an interview with NewsBusters, Mattera was asked about Christopher’s criticisms and replied “Tommy Christopher’s a joke. Nobody reads him. It’s probably him and his two moms. That’s about it.”

The “two moms” comment appears to be some sort of strange, junior high level and homophobic burn, that truly reveals the sensibility and character of Mattera. For more examples of his unique brand of immaturity check out his Twitter feed.

As for Mattera’s claim that no one reads Tommy Christopher, actually in the last month his posts have been read by nearly half a million readers, and his work has been linked by both Drudge, Hot Air and RawStory. No, he hasn’t made it on national television like Mattera, but he also wasn’t publicly scolded nor made a fool of himself either.