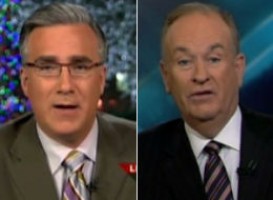 Bill O’Reilly and Keith Olbermann do not care for each other. Not only do they appear to vehemently disagree over the role of government, and the intersection of media and politics, neither appears to be able to mention the other without disparagement – or in O’Reilly’s case, even mention Olbermann’s name at all. However, there appears to be one significant issue on which they agree, and that is that Ted Koppel‘s recent critique on the state of television news — which indicted the methodology and mien of both Olbermann and O’Reilly — was way off base.

Both argued, last night, that they don’t get their facts wrong. Each, however, appeared to miss Koppel’s much larger point.

First, some background: last week the 47 year veteran of journalism wrote an editorial for the Washington Post entitled “Olbermann, O’Reilly and the Death of Real News”, in which, as the title suggests, he minces no words in describing his displeasure with the two biggest cable news outlets. Koppel wrote:

We live now in a cable news universe that celebrates the opinions of Olbermann, Rachel Maddow, Chris Matthews, Glenn Beck, Sean Hannity and Bill O’Reilly – individuals who hold up the twin pillars of political partisanship and who are encouraged to do so by their parent organizations because their brand of analysis and commentary is highly profitable.

The commercial success of both Fox News and MSNBC is a source of nonpartisan sadness for me. While I can appreciate the financial logic of drowning television viewers in a flood of opinions designed to confirm their own biases, the trend is not good for the republic. It is, though, the natural outcome of a growing sense of national entitlement. Daniel Patrick Moynihan’s oft-quoted observation that “everyone is entitled to his own opinion, but not his own facts,” seems almost quaint in an environment that flaunts opinions as though they were facts.

True to form, both O’Reilly and Olbermann responded to Koppel’s critique in kind. In his inimitable beat-cop style, O’Reilly metaphorically pokes Koppel in the chest, challenging the news vet to “give me examples of me lying on the air, using an opinion not based on fact,” continuing, “He couldn’t do it and if he could, he oughta come on in here and do it, and he’d shut me up for good.”

Olbermann also chased Koppel’s (alleged) accusation that what he did was beyond the facts, claiming “the very kind of fact-driven journalism Mr. Koppel seems to be claiming he represents, and I fail at, would not stand for his sloppy assumptions and false equivalence of ‘both sides do it,'” adding “we do not make up facts here, and when we make mistakes, we correct them.” Olbermann then offered a more nuanced rebuttal. As Mediaite’s Frances Martel wrote:

He concludes with a complete condemnation of Koppel, saying that he and those who followed his model of journalism during the Bush era “failed” as they allowed “decreasingly coherent excuses” for the Iraq War to pass under their radar. “When truth was needed all we got was facts– mostly lies, anyway,” Olbermann snapped, claiming Koppel and “objective” journalists were “praying at the altar of the false god of objectivity” when they should have been investigating.

Olbermann’s larger point is that “objectivity” is an illusion that has, in today’s post-modern world, morphed and perverted into neutrality. In many respects, cable news audiences (and media critics) have not caught up with Olbermann’s vantage point or astute analysis.

While O’Reilly’s rebuttal was more of a brush-off to Olbermann’s exegesis, both prime-time cable news hosts hit at the same theme: that Koppel questioned their delivery of “facts” over opinion and that, with pounding fist, neither are guilty of making things up. This generally may be true, but it also seems to miss the main point of what Koppel wrote (so at least Bill and Keith have that in common.)

At least most of the time, neither Olbermann nor O’Reilly get their facts overtly wrong. But both are guilty of something just as pernicious: taking phrases and comments out of context and amplifying them for their own political gain. That appears to be the crux of Koppel’s complaint.

The fact that neither Olbermann nor O’Reilly are seen as “objective” makes their sometimes important, but always subjective, words often fall on deaf ears. The reason Walter Cronkite and Edward R. Murrow had such impact was because they were seen as objective as opposed to fierce partisans with an agenda. It is true, looking back with rose-colored glasses, at a time that once was, may not serve as a realistic model for a 21st century, But for better or worse, neither Olbermann nor O’Reilly have the objective credibility to have the impact of a Cronkite a Murrow. But in this day and age, Cronkite and Murrow would have lost cable news shows years ago due to poor ratings.

There is no question that Olbermann and O’Reilly are at the top of their game. But perhaps that’s the operative word: “game.”