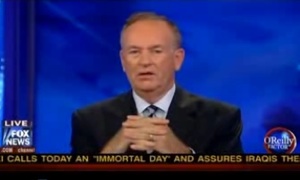 Tonight President Obama gave the second prime time oval office speech of his term in office, commemorating the end of combat operations in the Iraq war, and thanking U.S. military for a job well done. It was a serious speech that stayed primarily focused on the ongoing mission in Iraq, but also brought in the military efforts in Afghanistan and the economic woes that the U.S. is currently enduring. During a special live episode of The O’Reilly Factor host that followed, Bill O’Reilly remained unimpressed. The reason? He found him boring.

O’Reilly’s critique of the sitting President for not being entertaining while addressing the nation during a time of war stands in stark contrast to the rhetoric that came from the very same show in the earliest days of the Iraq War: O’Reilly often chided critics of President Bush for being unpatriotic. Granted, those were very different times for a variety of reasons. Most notably, the emotions that came from events of 9/11 were still very raw in the early years of the Iraq War. Secondly, President Bush was more politically aligned with the self-described traditionalist O’Reilly. Finally, President Obama effectively ran for President opposing the Iraq War and voted against the surge in troops that many see as the strategic approach that proved most effective in transitioning the mission in Iraq.

O’Reilly’s criticism of President Obama’s style gets called out by guest Alan Colmes, who admonishes the host: “You can’t get him on substance, so you go over his style.” O’Reilly wasn’t hearing it, however; he later calld out Obama for the way he held his hands during the speech. Guest Monica Crowley follows with the derisive claim that Obama “he did look like sort of a ‘Myron” with a propeller hat.” The President of the United States looks like a nerd? Really?

In a moment that had as much historic significance as this – particularly about an issue that has previously earned a vast amount of coverage on this very show – O’Reilly’s critical words were awkward at best. In the words of O’Reilly, they were unbecoming of a patriot and more like the comments of a pinhead.