Bloomberg: ‘I’ve Earned My Place in Heaven; It’s Not Even Close’
HUMILITY

Bloomberg: ‘I’ve Earned My Place in Heaven; It’s Not Even Close’ 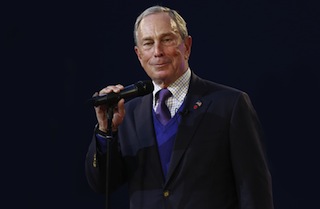 ‘Twas once said that “it is easier for a camel to go through the eye of a needle, than for a rich man to enter the kingdom of God.” Well, former New York Mayor Michael Bloomberg must have enough moola to pull off the camel-needle trick, because he sounds pretty dang certain he’s getting another three terms in heaven.

In an interview with the New York Times largely focused on his efforts to advance gun control, Bloomberg said his actions on earth would ensure him the VIP line into the pearly gates:

Pointing to his work on gun safety, obesity and smoking cessation, he said with a grin: “I am telling you if there is a God, when I get to heaven I’m not stopping to be interviewed. I am heading straight in. I have earned my place in heaven. It’s not even close.”

Reports that rising rents in heaven have been pushing out the locals went unconfirmed at press time.

A less eye-popping quote, but perhaps more important one, came in response to the charge that his gun control advocacy, which at times target vulnerable Democratic candidates, could flip the Senate to the GOP, making his legislative goals all but unachievable.

“You can tell me all you want that the Republicans would be worse in the Senate than the Democrats,” Bloomberg responded. “Maybe they would. But that’s not what we’re talking about here.”