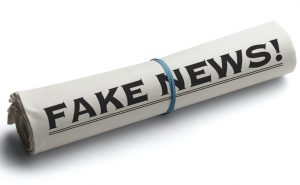 It probably shouldn’t surprise anyone that the dialogue over what is and isn’t “fake news” got wildly out of control. It happened really quickly, to the point that it doesn’t seem like anyone even remembers what the original uproar was about in the first place. “Fake news” is now a weaponized phrase regardless of the political beliefs of who’s saying it, and it regularly shows up as a description of :

When the “fake news” discussion started a few months ago, the term, or at least it’s initial common usage, referred to none of these things. It didn’t matter if the story was false, because falsehood in and of itself was not what qualified a story as fake news. That’s not how the premise of “fake news” was defined when this became a major issue of public concern last Fall, and rightfully so. The Washington Post screwing up the “Russia hacks the U.S. power grid” story isn’t fake news, and neither is the University of Virginia rape feature in Rolling Stone. It’s just sloppy reporting. It’s problematic, but it’s also distinctly unique from what alarmed so many people in the run up to the election.

So if it’s not enough for the story to be false, what makes something fall under the “fake news” banner?

When this became an issue of growing concern, fake news appeared to be defined as a false story where there’s good reason to believe that the author(s) knew full well that it wasn’t true. Telltale signs included:

#3 and #4 were especially prevalent in the “Hillary Clinton arrested!” stories that appeared during the election. It’s something that, say, MSNBC would absolutely cover in spite of leaning left. In addition, articles about that “news” had images that juxtaposed a photo of Clinton looking shocked with one of  police carrying evidence bags to their cars. The implication that the police photo was outside Clinton’s home. Another example of #4 would be the popular fake story claiming that Pope Francis had endorsed Donald Trump for President of the United States. You could tell that the story was fake because, if it was true, the mainstream media would obviously be all over it.

This is not a difficult concept to grasp, but both sides have been guilty of applying the “fake news” label to shut down discussion of a given story. There is still a real problem here, and it doesn’t even matter if it’s driven by partisan agenda, greed for the advertising revenue, or both. Misinformation is a bad thing no matter who is behind it, so please stop moving the goalposts and acknowledge that this isn’t healthy for anyone.