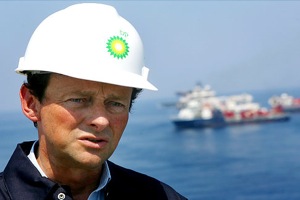 Sadly, it seems my memo to BP CEO Tony Hayward (the short version: “nobody likes you”) didn’t get to BP quickly enough. Readers of the Wall Street Journal woke up to the distinct pleasure of seeing Hayward’s name in print next to a column explaining his company’s plan to clean up their disastrous mess in the Gulf of Mexico. Hayward delivers a strong, exhaustive explanation of his plan, and the most sincere apology he has yet to muster, but, unfortunately for him, his reputation precedes him.

He starts the op-ed noting that he had recently attended the memorial service of the victims of the Deepwater Horizon disaster: “It was both a shattering moment and a vivid reminder of the duty that a manager owes to ensure that team members safely return home to their families.” But that’s about as emotional as it gets– and that’s a good thing. The last time we saw Hayward express sincere emotion, he was yearning to have his life back. Taking a page from President Obama’s book, rather than taking too much time to lament the disaster, he goes through an exhaustive explanation of how BP is going to fix it. It’s the first time he gives Americans an idea of how he got to the top job in the first place: by being proactive.

Yes, that is praise for Tony Hayward, a man who could not be more fun to hate, but is ultimately more of a tragic hero than a deliberately evil antagonist. Neglect, after all, is not the same as deliberate action. This WSJ op-ed is the least gaffe-y thing he has done since April 20, and it shows a major sign of improvement over previous efforts to take charge. That’s not to say that it’s hard to cringe at his attempt to spread the blame around (“the question after the Deepwater Horizon accident is how all involved parties—including exploration and production companies and drilling contractors—can work even more closely together to better understand and significantly reduce the various risks associated with drilling operations”), but it’s an improvement.

The column, by virtue of its quality as an explanatory piece, shows that the success of the LMRP so far has given BP enough breathing room to come up with something Americans may take more warmly to. At the very least, it’s a solid attempt at asserting leadership in a troubled time. What it doesn’t take into consideration is the fact that Americans don’t really want Tony Hayward to be asserting leadership over the oil leak– or anything, really. He could single-handedly swim to the bottom of the Gulf and cap the well with his bare hands and Americans would still be reluctant to trust him, because, either out of detachment or desperation, he has branded himself as a heartless capitalist fiend. Eugene Robinson, who writes in his Washington Post column today that he is shocked Hayward still has a job, put it best: “If he told me my mother loves me, I’d want a second source.”

It’s fair to say many Americans feel the same, and that’s not going to change with Hayward constantly in the spotlight. He may be the man for the job, and may have the know-how to fix the problem, but no one wants to see him. No one wants him around. His presence alone is damaging to the company. And yet he insists on taking the blame in a very public way, risking the criticism that he is spending more time on PR than on the actual task at hand. Hayward may be doing what he thinks is the moral thing by assuming responsibility and putting his face out there for everyone to jeer at, ultimately protecting the company. But it isn’t smart for either the company or his personal popularity.