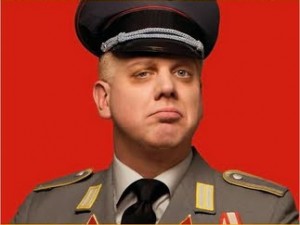 Earlier today, Mediaite’s Matt Schneider compiled a rather damning list of examples of Keith Olbermann making Nazi references There were probably more than a handful of readers who saw the piece and immediately thought, “Well what about Glenn Beck?”

It’s a fair point, especially in light of Beck’s own outrage at Nazi comparisons. The Daily Show‘s Lewis Black collected ten such examples in May, and that was before Beck’s latest denunciation by the Anti Defamation League for comments about George Soros. It’s even fair to point out that the head of Beck’s network, Roger Ailes, was recently denounced for making such a comparison. It’s important not to pretend that this happens equally on both sides, because, as outgoing “Congressman with Guts” Alan Grayson has helpfully pointed out, that’s just what the Nazis would do!

For the sake of argument, let’s concede every possible point made by a theoretical Olbermann apologist. Let’s say Glenn Beck makes ten times more Nazi references than Olbermann, and that Beck’s are much, much worse. In a nutshell, let’s call this the very falsest of false equivalence. Such an argument misses the entire point.

From the ADL’s standpoint, references like these, regardless of the source, trivialize the still-fresh memory of perhaps the most horrific tragedy in human history. In that regard, the very idea of keeping score in some kind of Nazi Jeopardy! game is, itself, offensive.

For a political commentator, however, this rhetorical device carries with it the added consequence of undercutting whatever else he’s trying to say. As Black’s package so elegantly demonstrates, aggregating a bunch of them together gives the viewer little reason to listen to anything else Beck has to say, and every reason to dismiss him as a clown.

It is on this level that the false equivalence defense fails so miserably. As Schneider points out, “Olbermann’s fierce loyalty to principles rather than people, and his willingness to fight for liberal ideals rather than blindly trusting Democratic politicians” have earned him the status of de facto spokesman for my fellow liberals, and as such, we deserve better than this. At best, admirers of Keith Olbermann can boast that their guy is only one-tenth the clown that Glenn Beck is. That’s not nearly good enough.

Beck’s followers could make the obverse point that, even absent Olbermann’s journalistic falutin’, their guy has an equal responsibility not to beclown them. That’s up to them, we’ll see if they do.