Breitbart.com Would Like Black People And CNN To Please Shut Up About Being Black
video

Breitbart.com Would Like Black People And CNN To Please Shut Up About Being Black 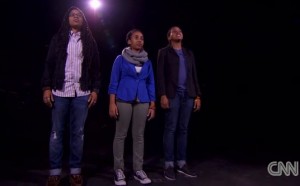 CNN anchor Soledad O’Brien recently premiered the fifth installment in her “Black In America” documentary series, an examination of the issue of “colorism” that asked the question “Who is black in America?”

The provocative program has stirred thoughtful reaction from the folks at Breitbart.com, who were so moved by the stirring, poetically-expressed experiences of 17 year-old Kai Davis, 16 year-old Hiwot Adilow, and 18 year-old Teila Allmond that they would like them to please stop appearing on CNN to silence opposition to the Obama agenda. Huh?

Breitbart.com Chief Black Menace Correspondent Ben Shapiro has moved on from attacking deceased pioneering black college professors to attacking living black teenage girls, who are pushing the notion that “being black is largely about experiencing racism from whites” because they recited some slam poetry (while “Standing on a dark stage”) about their own experiences occupying the “light-skinned” strata of America’s black experience:

You’re worth a little more if you’re golden,

Yellow enough to remind them of precious medals.

They’re blinded by the radiance in our pigment,

The milligrams of melanin spread thin enough to let light through,

The light makes us walk a little softer.

We can pass the paper bag test in the dark,

Can blend easily into any whitewashed backdrop,

Can dodge handcuffs without paying a fine.

The Face of Every Ad Marketed to Black People.

White enough to be a good one.

Our complexion makes even the most racist politicians comfortable.

They don’t mind sitting next to us, or shaking hands in public,

But won’t hesitate to remind us where we stand.

They never call us equal, yet treat us better than our browner sisters.

That’s some provocative stuff about the way American culture, both black and white, dissects racial identity based on degrees of skin color, or as Shapiro sensitively notes, “It goes on from here, but you get the idea.”

Actually, “from there,” the young women talk about how “Even black men want women brighter than their mothers, lighter than their sisters, whiter than their daughters. We’ve always been picked first in a bedroom scrimmage, like the honey in our skin makes us worth being tasted.”

Oops. So why are these obviously black-man-hating teenagers being featured on CNN? “They just want the American public to believe that we’re all irrepressibly racist, so that we’re silenced in our opposition to the Obama agenda.”

That’s interesting, given that there’s no mention of political parties in this poem, or any mention of Barack Obama. It’s almost as though Shapiro assumes this is about “the Obama agenda” because these girls are black, and the President is black, as though he is “prejudging” them based on their skin color.

Never mind that, though. Shapiro has important questions for the teen poets:

Have any of them been told they aren’t equal by a politician? Who has told them that? Can we get names? How have politicians reminded them “where they stand”? Could we get some specifics?

This is a great point, one which Shapiro first made in a blog post entitled “Joyce Kilmer Fails To Give Examples Of Trees That Are Less Lovely Than Specific Poems; Also Turns Out To Be A Dude,” and he also helpfully answers one of his own questions earlier in that same paragraph, by reminding them “where they stand”:

Who are these three members of “Team Lightskinned”? Kai Davis is a 17-year-old slam poet, and a member of the National Honor Society from Philadelphia. Hiwot Adilow is the 16-year-old Philadelphia-born daughter of Ethiopian immigrants and a slam poet. And Teila Allmond is apparently a student at Philadelphia’s Science Leadership Academy. But CNN is pushing them as though they’re Rosa Parks’ peers, even though they’re three generations removed from Rosa Parks.

Yes, three generations removed from Rosa Parks, and these uppity, ungrateful girls don’t realize that they’re allowed in the front of the bus, and should just shut up. One of them isn’t even American African American. Where do they get the nerve to suggest that some politician told them they aren’t equal? Besides here, I mean:

the African-American community should demand paychecks and not be satisfied with food stamps.

Wow, even the Ethiopian one fits into that box. Is that specific enough for Ben Shapiro? Only time will tell.

The election is over, but if the Breitbart-Daily Caller–Media Research Center nexus is any indication, the war on white people is just beginning. If Soledad O’Brien really wants to know “Who is black in America,” she can just look to see who these sites are attacking.

Here’s the video that set Shapiro off, from CNN: