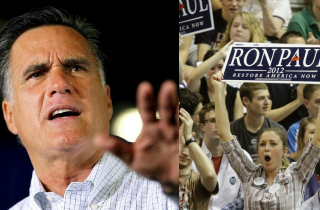 In a two-part column over at Breitbart’s Big Government, Kurt Schlichter practically begs libertarians to “support our Constitution” and vote for Mitt Romney this November in order to avoid not only the “destruction of this country” by way of a second Obama term, but also to avoid the destruction of libertarianism by way of the Libertarian Party becoming a pariah.

Schlichter’s misunderstanding of the libertarian mentality doesn’t help, either. The first and most obvious mistake he makes is to conveniently overlook the fact that small-L libertarians are truly unconcerned with the Libertarian Party. “Remember the Greens?” he ominously asks libertarians, alluding to the fact that following the Green Party’s role as “spoiler” in Al Gore‘s 2000 presidential bid, the “Greens” died off and became a punchline.

He naively assumes libertarians actually care what happens to the party that, for years, has been mismanaged and run by glibertarians like Wayne Allyn Root, a birther who only recently realized it’s time to give up the act and join the GOP. For many libertarians, the party already is a punchline. And looking at this year’s “none of the above” incident at the Libertarian National Convention, can you blame them?

Schlichter makes the case that libertarians will sure-as-Hell never find a home in the Democratic Party, what with the party’s “free this, free that, bailouts this, bailouts that” spectacle at the 2012 DNC. He rightfully points out that the Dems only occasionally make attempts to reach out to libertarians, but are happy to eliminate that support at the drop of a hat. This is probably true. But dedicated libertarians find themselves politically homeless mostly because the corrupting forces of party politics are inherently in conflict with remaining ideologically principled. For many libertarians, a functioning political party to call home is not the desired end-game.

Schlichter’s blind partisanship is unlikely to convince libertarians either. What’s most insulting about the column is how he lectures libertarians about how President Obama is on an unstoppable path of “trampling” the Constitution and Bill of Rights, one amendment at a time. He notes in terribly overwrought language that “Obama’s spent nearly four years trampling the First Amendment,” and that the Second Amendment is “just one Supreme Court vote from being snatched away.” Look, it’s no secret that the Obama administration has a seeming disregard for the Constitution. Schlichter suggests that, therefore, libertarians who are truly dedicated to the age-old document need to support Romney and the Republican Party because they are different — they will save the Constitution and end the madness.

But hey, guess what? Many of President Obama’s constitutional abuses are simply extensions of the ones initiated under President George W. Bush — you know, that other unsupportable Republican that we libertarians were all told to shut up and vote for in 2004.

Schlichter points to the administration’s recent “rousting” of the Innocence of Muslims filmmaker as an Obama First Amendment abuse. The president’s handling of this entire “movie-causing-riots” debacle was, indeed, frustrating to libertarians. And so we libertarians should support Romney because he’s dedicated to the First Amendment, right?

Not quite. This is the same candidate who pledged to “vigorously” fight the scourge that is all forms of adult pornography. Oh, and under the last Republican president, we saw an increase of pointless federal prosecutions of porn-makers like John Stagliano, who film consenting adults doing consensual things — you know, the kind of stuff Republicans hate when it involves sex, drugs, or gambling.

Sure, this current presidency has some constitutional abuses you wouldn’t have seen under Bush, but that’s because this is precisely how our two-party system works: When Democrats are in power, they abuse the Constitution by lighting the metaphorical candle at one end; and when the Republicans are in power, they abuse it by lighting the other end.

A Romney presidency would surely not be exempt from this natural process.

And so it is truly backwards for Schlichter to implore libertarians to “support the Constitution” by casting a vote for the Republican Party. Here’s a better idea:

How about you start supporting the Constitution? And how about you actually make an effort to incorporate libertarians by, for starters, not dismissing them only until it becomes politically necessary to beg for their support?
— —
Read Schlichter’s columns here and here.