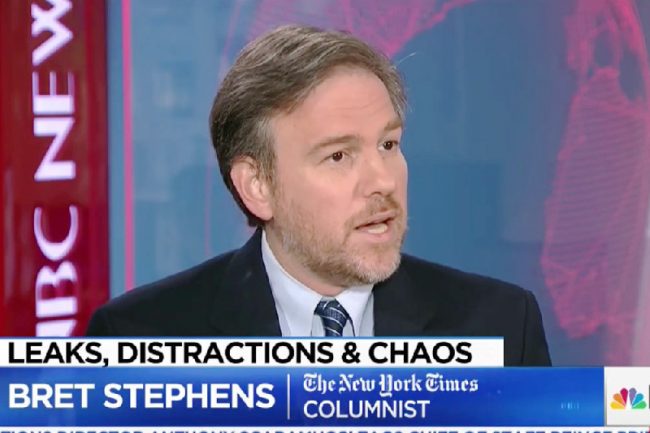 The walk-back was swift.

Barely an hour after he compared Secretary of State Rex Tillerson to Pol Pot (though not in the “killing fields” way) New York Times’ resident conservative columnist Bret Stephens backtracked.

On Twitter, Stephens offered a brief apology, ironically issued in response to someone who had praised his remarks.

“I let rhetorical exuberance get the better of me. RT in no way PP, not remotely or by analogy. I apologize,” he tweeted.

Wrongly, @paulcadario. I let rhetorical exuberance get the better of me. RT in no way PP, not remotely or by analogy. I apologize. (BLS) https://t.co/7ST1AUrLwO

Stephens made the original comparison during an appearance on Morning Joe. The analogy instantly raised eyebrows on set.

“Wow. Ok that is… Ok if that is in fact the case, that is like one of the worst Secretary of State’s of all time,” said Scarborough.

Stephens asserted that his true intention had been to compare how Pol Pot or Maoists often used chaos as an operating principle.

I don’t mean the Killing Fields. I mean the year zero mentality. Blow it all up, see what happens, wait for a while and then try to arrange the pieces as you see fit. That might work in a start-up environment. It doesn’t work in a bureaucracy with 70,000 people.