Brian Sack Talks About His New Show, Working For GBTV, And The Difference Between Anchors And Chickens
video

Brian Sack Talks About His New Show, Working For GBTV, And The Difference Between Anchors And Chickens 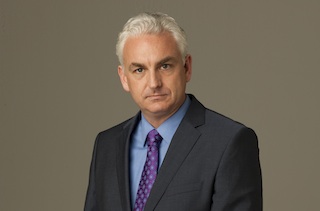 Ever since the premiere of GBTV, the online network fronted by Glenn Beck, we’ve theorized that the biggest and most interesting challenge for the fledgeling enterprise would be building up their shows that didn’t star the guy behind the eponymous “GB.” Well, tonight, what might be the new show with the biggest profile is premiering. The B.S. of A. is a new political comedy series hosted by Brian Sack and, recently, Sack spoke to Mediaite to discuss what will set his show apart.

We’ll start with a topic that, unfortunately, you may already be sick of. When I went to a taping of Glenn’s show a couple months ago and saw you do your segment, someone introduced your show to the audience as a right-leaning Daily Show, a description you seemed to want to downplay.

So, tell me in your words, how would you describe the new show? What is The B. S. of A. going to be?

Yeah, people immediately assumed that we were going to be doing a right-wing comedy show. I understand why they’d think that – because Glenn Beck is writing the checks – but it’s not accurate. From the beginning we’ve been saying that we’re going to be non-partisan. The intention never was to create a “right-leaning Daily Show” but rather a show that didn’t have its flag planted so far down the left end of the spectrum that it was blind to the nonsense going on there. I’d love people to have a smidgen of objectivity. I’m not an ideologue or partisan. I’m probably a Penn Jillette/Drew Carey libertarian. I’m not registered for either crappy political party and I think the bulk of Congress is a self-interested schmuck-fest that keeps passing terrible laws.

So, it’s a comedy show with a political bent. I’m sure we’ll eventually talk about the horrible, terrible, awful, dreadful Kardashian family and other things ruining America that fall under the “B.S. Of A.” category. But politics will be a big part of it. We have a sketch about the Executive Branch’s fantastic new ability to assassinate American citizens abroad. There’s a children’s show with agenda-driven puppets that do everything but teach the alphabet. A Republican debate on the Isle of Skulls. We’ll also have interviews with people who can opine on what’s bullshit in this country.

Ultimately we just want to find the humor and make a joke. Fortunately our stellar president and the wonderful line-up of GOP hopefuls gives us new material every thirty seconds.

You’ve been working with Beck for years, ever since back in the CNN days I believe. When in the whole GBTV development process did the idea form of building a show around you? What were the origins and what were your original thoughts?

Glenn recently said that he’d been wanting to do something of this nature with me since back in 2006 when he saw a comedy short called The Paul Reddy Show that I’d done with musician John Mayer. That short was what originally landed me my “Public Viewer” gig on the Headline News show where I mainly picked on Glenn and occasionally opined on politics. That was great fun, but then he moved to Fox News and it became clear that I wasn’t the right fit for the show’s new tone. I did two or three bits at the very beginning and that was it.

Shortly after I dried my tears they brought me on board his Insider Extreme online network as “Czar-at-Large” where once a week I picked on him and summarized the previous week on his radio show. When that got a little too routine my producer Dominic and I started trying to spice things up with commercial parodies, campaign ads, fake documentaries – and the response was great. One of our best bits was a “look back” at the disastrous 2016 Glenn Beck presidency.

They sat me down earlier this year and said they were launching a network and wanted me to do a comedy show on it. Once again I said that sounded great. At the time I thought that meant Dominic and I would be wandering around with a camera as we had been doing – just more often. Then we hired Jack Helmuth as the showrunner and the whole dynamic changed. He brought his experience working on network comedy shows and the next thing I know we’re hiring numerous people and buying a giant cork board to pin ideas to.

As far as my original thoughts go, there were two that were the most important. The first was “Do I want to work full-time for Glenn Beck?” I worked freelance for them for a long time and knew almost everyone at the company. I knew they were happy there. I knew the company took care of its employees. Other than a propensity to make elaborate plans at the very last minute, I’d never heard complaints about Glenn. Everyone in his orbit genuinely likes him. I know that’s a terrible thing for his many detractors to come to grips with, and I’m sorry.

The other big question was “Do they expect me to do a conservative comedy show?” That would have been a deal killer for me. I don’t want to helm the next Half Hour News Hour. Fortunately everyone had seen Half Hour News Hour and they were on the same page. They didn’t want a conservative comedy show, but rather one that’s capable of serving an audience that has traditionally been underserved. So, the goal was to be non-partisan, to have no sacred cows.

>>>>NEXT PAGE: The pressure of helping define a network