Brian Williams On Katrina: What Happened To Our National Conversation On Race And Poverty? 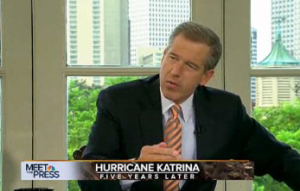 Today marks the 5th anniversary of Hurricane Katrina. Meet the Press did a special broadcast this morning from New Orleans, hosted by Brian Williams to mark the occasion including a fascinating tour of Brad Pitt‘s Make It Right housing project in the Lower Ninth Ward, and hard panel discussion about NOLA five years later. Also, whatever happened to that national discussion we were supposed to have about poverty and race?

After playing some very devastating clips from NBC’s 2005 coverage of Hurricane Katrina including a clip of Aaron Broussard, president of Jefferson Parish, weeping on Meet the Press, begging Tim Russert for help. BriWi reflected on the disparity between the treatment of the residents of NOLA and the NBC staff that went down there to cover it:

The children and relatives of the people at this table, I’m going to go ahead and guess would not have gone a week without water or food because their dads, their dads’ companies would have found a way as NBC news did to get us supplies in the central business district. they found us in the parking lot of a used car dealer and made sure we had something to drink. What’s the difference? Why didn’t it matter to someone? Why wasn’t someone able to get supplies and get those folks out?

That’s harsh assessment, one that would have been harsher and perhaps more helpful if more people had focused on it at the time, but nevertheless, here’s guest Wendell Peirce‘s measured response:

I think the thing you have to remember is that we have to understand that the disaster lifted the veil of issues of race, of issues of class, not only in this city but in the country. If we are to move past it and truly be a part of this wonderful recovery that we’re feeling, we can’t looked at it through rose colored glasses. there’s not an indictment of one person. it’s an indictment of us all.

Later BriWi asked historian Douglas Brinkley “what happened to that national conversation we were all supposed to have about what was exposed by Katrina?” Brinkley says we “got amnesia” and “forget quickly.” One might suggest the country would be less apt to get “amnesia” and “forget” if powerful media folks like NBC and it’s uber popular anchors were more apt to shine a consistent light on the problem in the intervening years between big anniversaries. One might also suggest that we are in fact embroiled in a national conversation about race, it just simply does not look like what anyone imagined or hoped it would five years ago.

Meanwhile, here’s a happier story involving Brad Pitt, who has been very active in the rebuilding of the Lower Ninth Ward. Perhaps most interesting about the Make It Right housing he has helped build in NOLA is that they are green, Pitt says it is now “the greenest neighborhood in the world.” This means, among other things, that the houses themselves produce more energy than they consume. Says Pitt: “Families were getting bills that were $8, $12, processing fees it tell them they didn’t owe anything for utilities. There’s no reason to build any other way. I think this place is a template for the future.” It’s truly amazing to think the Ninth Ward could be a template for anything positive five years after being devastated by Katrina. Both segments below. I think they’re worth your time.