Bristol Palin Gets Shouted At In Restaurant: ‘You’re Mother’s The F**king Devil!’ 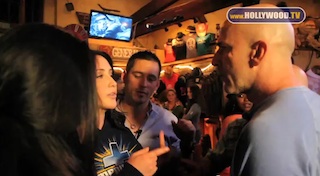 Guys, great news! For everyone watching this video and worrying that you don’t have enough reason to hate all of humanity this morning, we’ve got you covered! Here’s a video of a grown man getting in Bristol Palin’s face at a restaurant and yelling that her mother is a “whore” and “the devil.”

Whoo! It’s Everyone Sucks Friday here at Mediaite, isn’t it?

Anyway, so here’s what happened. Bristol Palin is apparently filming a reality show (yes, everything about this story is completely disgusting) and was getting some footage at the Saddle Ranch on LA’s Sunset Strip. After she rode a mechanical bull and hung out with her friends for a while (God, reality shows are fascinating), she got accosted by some guy who starts yelling at her, asking if she rode Levi like she did the bull.

Bristol actually does a good job keeping her composure as the man yells in her face, trying to calmly ask him why he hates her mother. He comes up with some totally brilliant reasons (“She lives! She breathes!”. Then, however, Bristol decides to come up with her own and asks the guy if he hates her mother because he is “a homosexual.”

Basically the discourse between the drunk jackass at the bar and the teenaged reality show star is about as mature as one would imagine it to be. Ugh.

Of course, there is the possibility that the guy was a plant and this was a fabricated altercation to stir up excitement for the show, but I’m going to tell myself that isn’t true. Not because it’s unlikely, but because the idea of the show’s producers writing the script for this scene (“Ooh! Make him gay! And he should call Sarah Palin a whore!”) is somehow more depressing than the idea of it being real.

Anyway, watch the video below. I’m going to go watch this video a couple thousand times until I feel clean again.