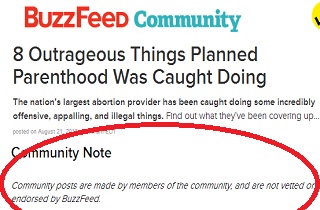 The snark-tank that is Wonkette has been making a mini-hobby of slamming Buzzfeed over bog posts in its “community” section, which is only slightly different from slamming Wonkette over something written in its comments section. Anyone can write a Buzzfeed community post, even fail-tastic conservative “think” tanks. Still, buck Fuzzfeed, amiright? Let them have their fun. Today, Wonkette‘s Gary Legum calls Buzzfeed “terrible” over a community post by a group called “Personhood USA,” which apparently is not dedicated to full-length standalone sweatshirt accessories:

Some days, when the existential fear of meaninglessness that shadows all human life has pressed its jackbooted heel upon our tender necks and loss weighs upon our hearts, we like to cruise Buzzfeed for soul-affirming lists of 17 Cats That Know How to Party or 41 Awesome Muppet Show Sketches You Haven’t Watched Since 1982 or whatever. But sometimes Buzzfeed makes us sad, like when its Community section tries to Win All the Internets with bullshit lies from “clever” conservatives. Why do you hurt us so, Buzzfeed?

Case in point is today’s “argle bargle liberals want to kill all the babies” tripe titled “8 Outrageous Things Planned Parenthood Was Caught Doing.” Sure! If by “caught doing” you mean “things PP employees said that anti-abortion advocates LiveAction.org willfully misinterpreted or tried to trick them into saying and then wouldn’t admit to doing so even after the FBI investigated and told LiveAction to slurp shit and die.”

It is truly a pack of lies, but again, it’s also a community post, right? As such, Buzzfeed can’t very well treat it differently than it would other community posts, just because it’s a pack of lies that might offend certain readers. That would be wrong. Also unfair. As wrong and unfair as Gary Legum holding Buzzfeed responisble for this travesty, even though it’s a community post, and therefore is not vetted or endorsed by Buzzfeed. You know how I know that? Because it says so right there in Personhood USA’s post:

Community posts are made by members of the community, and are not vetted or endorsed by BuzzFeed.

In fact, it says it on all Buzzfeed community posts, doesn’t it? Oh, it doesn’t? They only made that disclaimer up for this one post? Well, that doesn’t seem right, then, because that would mean that this post actually was “vetted,” and maybe Wonkette has a good reason to call Buzzfeed “terrible,” because they hated this post enough to invent a disclaimer, but not enough to, you know, not publish it.