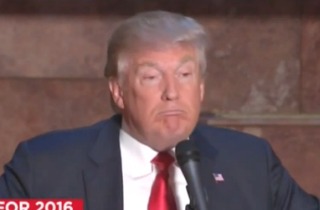 Okay guys, this is getting pretty ridiculous.

“Unless Trump plans on ruling by Presidential Decree, I don’t see how he would implement ANY of his ‘plans,’ the rest of the sold out ‘mainstream’ political whores would block his every move,” Suhayda told Kaczynski via email. “I seriously doubt if he even believes all what he says, but its nice to have someone like him saying it.”

There’s more, of course, and most of what Suhayda had to say regarding Trump’s proposed ban had very little to do with Trump’s proposal.

“Look, this phrase ‘muslims’ is simply a PC code word to cover the reality of all these THIRD WORLD peoples invading OUR country,” he said. “Don’t you realize that in about 2025, if these trends continue, White people will become a continuing MINORITY in our own land(s)?”

No, he isn’t finished yet.

“If they sprinkled ‘holy water; on themselves and suddenly began praying to another Middle Eastern supernatural entity, would that suddenly make them all ‘ok?’ The systemites are determined to make ALL White homelands obsolete. Soon there will be no more White/European culture and peoples.”

All of this is terrible, of course. Yet whether or not the story’s subject is actually relevant to the current election cycle remains to be seen. Obviously it relates to Trump’s proposed ban, its racist undertones (intentional or not), and its possible implications. But Trump isn’t running for the American Nazi Party ticket — if there is one.

There’s also the matter of the recent BuzzFeed memo, written by Editor-in-Chief Ben Smith, regarding whether or not it’s okay for its editorial staff to condemn Trump publicly on social media. Smith argued that, since their reporters were covering Trump’s statements and the falsehoods supporting them, it was “entirely fair to call him a mendacious racist.”

But what about pulling a tabloid-esque maneuver with the story’s top spot on the main splash page? Kaczynski screenshot and tweeted an image of the article’s banner headline, which reads “With Friends Reich These.” Oh yeah, Trump’s also waiving doing the Nazi salute in the featured image.

Let’s be clear. I am by no means a Trump apologist, but that doesn’t preclude me from seeing this as being no different than the most ridiculous covers published by papers like the New York Daily News, the New York Post or the National Enquirer. Not just for what the image selection falsely suggests, but also for what the banner headline reads. Trump and Suhayda are not friends.

Does Suhayda and the American Nazi Party support Trump’s campaign? Yes, to a degree. In a blog post he pointed out to BuzzFeed, the chairman called Trump’s statements on illegal immigration and ISIS were a “wonderful OPPORTUNITY” for the party. Sounds positive, sure, but it has less to do with supporting Trump’s candidacy and more with bolstering the American Nazi Party. He wasn’t endorsing the presidential candidate.

As of this writing, BuzzFeed’s splash page is still using the above graphic and banner headline.