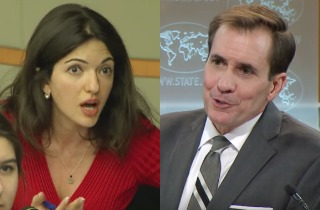 State Department spokesman John Kirby snapped an at RT reporter yesterday who asked about the United States’ involvement in Iraq and tensions between Iraq and Turkey.

The prime minister of Iraq wants to file a complaint with the United Nations over the presence of Turkish troops near Mosul. According to The New York Times, Haider al-Abadi said, “This is a flagrant violation of the provisions and principles of the UN Charter and in violation of the sanctity of Iraqi territory.”

Kirby said he hadn’t seen the reports, and told Chichakyan he doesn’t like the “completely baseless charge” that the U.S. is not working in full cooperation with the Iraqi government. He said, “I’m gonna give you just one more, honestly, and that’s it.”

She charged that whenever something goes wrong in Iraq, the U.S. says “it’s none of our business” and pushes blame. Kirby was again baffled, saying, “I love these questions that are ten minutes long and then I’m supposed to get the grain of it out of there.”

From there, he repeatedly called her questions “ridiculous” and said, “I can’t believe honestly that you aren’t embarrassed to ask these questions. You have to be looking at these questions and almost laughing to yourself, don’t you? I mean, they’re absolutely crazy.”

Chichakyan retorted, “Exactly which question should I be embarrassed about, sir?”

Kirby said she can ask whatever she wants, not-so-subtly noting, “I notice that RT very rarely asks tough questions of their own government.”

Watch the full exchange above, via RT.