Cab Driver Stabbed By Passenger Who Asks “Are You Muslim?”

Cab Driver Stabbed By Passenger Who Asks “Are You Muslim?” 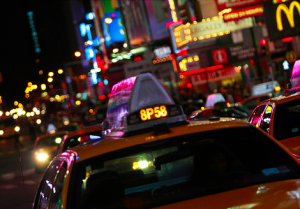 NY1 is reporting a scary story: Apparently a New York City cabbie was stabbed Monday night by his passenger — after confirming that the cabbie was Muslim:

Investigators with the New York City Police Department say it all began Monday night when a 21-year-old man hailed a cab at 24th Street and Second Avenue in Manhattan.

According to NY1, the cabbie managed to lock the passenger in the back seat while he called 911. Then both cabbie and crazy deranged passenger were taken to Bellevue Hospital, a few blocks away. According to NY1 — and sort of incredibly — as of late last night, the crazy deranged passenger had not yet been charged. No word on the condition of the cabbie at this point, either. Right now, NY1 appears to be the only source for this story (and their source seems to just be the police). Update: TPM reports that the passenger, a 43 year-old Asian man named Michael Enright, has been charged with “attempted murder two as a hate crime, assault with a weapon as a hate crime, aggravated harassment second degree because of race and religion, and criminal possession of a weapon.”

Okay so: Anyone else sadly not surprised at a Muslim hate crime in New York City these days? The anger that flared up at the anti-Mosque protest on Sunday sure looked like it could have led to something scary. Anti-Muslim invective is not a new phenomenon — Glynnis MacNicol reminded me how after 9/11, many Muslim (and Indian) cabbies put American flags in their windows, to signal their patriotism. It’s not just in New York, either: In San Diego, a cabbie was attacked in May after taking a pit-stop to pray. In Chicago, cabbies are now driving around with anti-Islamic ads on them, sponsored by a group called “Stop The Islamization of America.” on Open Salon, a contributer wrote about hearing the 9/11 stories of cab drivers, particularly one Muslim man:

The one cab driver that has stayed seared in my mind, that haunts me even now, was an older man, a Muslim, who had been a U.S. citizen for over 20 years. His accent was thick and his patrioticism fierce. He loves this country, he is an American citizen. He told of the dozens of times since 911 he has had passengers, fellow Americans, scream at him, tell him to go back to the Middle East, call him names, slander him, curse him, spit at him, blame him.

To be driving on 911 and witness what happened to a city that was his home for over 20 years, to be treated like the enemy by his fellow countrymen was demolishing. But he was not bitter. He was not full of hatred. He quietly said, “This is my home. This is my country. They just don’t understand. They may never understand. I pray for them.”

Muslims, of course, were also killed in the September 11th attacks.

Incidentally, Bellevue Hospital is not only an appropriate place to have taken the passenger owing to its work treating mental illness, but also for healing in the wake of the 9/11 attacks: the city recently awarded Bellevue $16 million to develop the World Trade Center Treatment Center, which will “provide free health evaluation and medical and mental health treatment to those exposed to dust or fumes.” Let the healing begin.