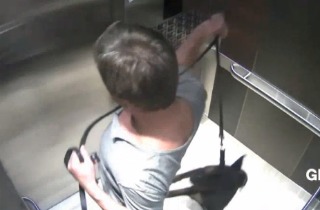 Desmond Hague, the CEO of catering company Centerplate, came under fire in the past week for a video of him kicking and abusing a puppy. Hague apologized and Centerplate said it would be conducting an internal investigation. And in a statement to Mediaite, Centerplate says it is placing Hague on indefinite probation.

Centerplate condemns Hague’s actions as “unacceptable and outside the bounds of our high standards and expectations of all of our staff.” Because Hague has expressed very public remorse for his actions, Centerplate is being given an indefinite probation and a written censure.

They also say in the statement that Hague will be donating $100,000, “which will be donated towards the establishment of the Sade Foundation in honor of the dog he mistreated in the elevator to help support the protection and safety of animals in the city of Vancouver where the incident occurred.” They are also requiring him to undergo 1000 hours of community service.

If you haven’t seen it already, you can watch the incriminating video here, via Global News:

And you can read Centerplate’s full statement here:

Centerplate’s Board of Directors recently convened a special meeting following the completion of an internal investigation and review of an incident involving animal cruelty by its CEO Des Hague.

We pride ourselves as individuals and as a company on how we treat others—both humans and animals. The company finds Mr. Hague’s personal behavior unacceptable and outside the bounds of our high standards and expectations of all of our staff. We do not condone nor can we overlook the mistreatment of animals and Mr. Hague’s personal misconduct.

Thus, upon internal review of the incident, and recognizing that Mr. Hague is truly ashamed of his actions and has expressed sincere remorse and shame for erratic behavior that is uncharacteristic of him we have decided to take the following immediate actions:

Mr. Hague will be given a written censure by the Board whereby he will be placed on indefinite probation stating that any further acts of misconduct would result in immediate termination.

As a condition of his continued employment with Centerplate, Mr. Hague will personally donate $100,000.00 USD which will be donated towards the establishment of the Sade Foundation in honor of the dog he mistreated in the elevator to help support the protection and safety of animals in the city of Vancouver where the incident occurred.

Further, we are requiring Mr. Hague to serve 1000 hours of community service in support of an organization that serves to protect the welfare and safety of animals.

Centerplate in no way condones the mistreatment of animals, and as a strong sign of our conviction, we the company will also contribute a portion of our sales to the Sade Foundation. Additionally, we will open this foundation to all Centerplate employees and the general public who want to support and contribute in the hope that meaningful change can come out of this tragic situation.

Mr. Hague still faces potential charges in Vancouver, where he is personally responsible for charges and fines in relation to the incident.