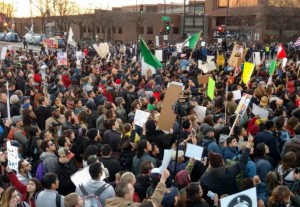 Presidential campaigns in the general election – particularly open races with an incumbent exiting — are oftentimes decided by events, by things outside of the candidate’s control.

In 1992, it was about George H.W. Bush having no control over a third party candidate entering the race (Ross Perot), who helped split enough votes to allow Bill Clinton to win the White House with just 43 percent of the vote (to Bush’s 38 and Perot’s 19). In 2000, it was about hanging chads in Florida and the Supreme Court ultimately denying Al Gore – the popular vote winner – the presidency. In 2008, it was about John McCain running against an economic collapse two months before the election and the burden of his party being the one in power at the time (and therefore recipient of the blame). In fairness to McCain, no Republican was winning that race under those conditions.

So here we are in 2016. This election season has been unlike one we’ve seen before, and unless another unfiltered billionaire reality TV star decides to run for president again, undoubtedly one we won’t see again in our lifetimes. And despite what should have been campaigning-ending comments – dozens of them — since his run began back in June, Donald Trump is the clear favorite to win the Republican nomination.

But the past week has seen one of those aforementioned kind of events that is getting beyond a candidate’s control: Violence at Trump rallies. And not just the kind one would see at a Rangers-Devils hockey game with a random fight or two in the stands, but the kind that escalates to the point of the actual rally being cancelled for security reasons. The big first question now is: Will massive, organized protests be the norm at a majority of Trump rallies — particularly those in major cities — moving forward? Social media makes mobilizing quite easy, and with activist organizations like MoveOn.org and Black Lives Matter involved – who are showing up in large numbers not to protest as much as they are to disrupt and incite — the answer is probably yes. Remember, this isn’t about free speech, it’s about scorched earth and creating chaos on the campaign trail.

From a media perspective, here’s what you can expect as a cable news viewer: Even more Trump coverage. Because when it comes to news today, know this: It’s rare big news can be predicted on a daily basis. Town Halls, debates, yes… they always rate high and are obviously planned in advance. But violence on the trail, almost on cue? That may become an actual, predictable occurrence when it comes to Trump. And as we saw Friday night and this morning with hours upon hours of non-stop coverage out of Chicago with live and replayed images of massive police presence, fists flying and Trump practically providing play-by-play perspective by phone commenting on what he was seeing on screen on Fox, CNN and MSNBC in various interviews, this is the type of offering that – while unfortunate and ugly – will rate highly (numbers of last night’s coverage across the cable networks will be available later today and we’ll update accordingly).

So is Trump calling for calm? No, and he likely won’t. That’s not his style to accept any responsibility for the rhetoric, especially with every other GOP candidate demanding he acquiesce here. And by not backing down while going on the offensive against protesters (stupidly once saying, for example, he’d like to punch a protester in the face), it only helps give the MoveOns and BLMs the perfect excuse to mobilize and incite.

But even if Trump does call for peace, ask yourself this? Will the two aforementioned organizations simply agree with that call, suddenly cease from suppressing any opposition voice to its own… stop infiltrating rallies, and just go away? Because with all the media coverage descending on every Trump event waiting for the next shoe to drop (or fist be thrown), it’s the perfect platform to promote themselves with a huge audience watching.

In other words, don’t expect the coverage, the mayhem, to subside anytime soon. The angry left meets the angry right. It’s going to get worse before it gets better.

Presidential campaigns often can swing on events outside of the candidate’s control. And from all appearances, controlling his own events may be something Team Trump is losing a grasp on if last night’s cancellation is any indication. If the trend continues, it’s impossible to win that way… at least beyond the primary season, anyway.

You think you’ve seen too much Trump to this point? Well, get ready…

Because apparently you ain’t seen nothing yet.