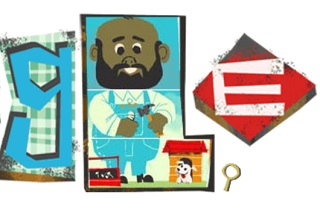 It’s nice to see the 21st century being dragged into the 21st century. On the heels of Cheerios’ decision to use an interracial family in an adorable television commercial, a decision that was a shock to the system for racists everywhere, Google has, for the first time, used an image of a black dad in it’s Father’s Day “doodle.” Doodles are permutations of the Google logo that the company uses to celebrate occasions like Father’s Day, or Hugo Chavez’ resurrection.

The interactive doodle begins with the above image of a black dad fixing a dog house, but if you click on the second “o,” the picture gets shuffled, slot machine-style, to produce other images. For example, you can get an image of a black dad feeding a white baby, presumably wearing flesh-toned gloves?

All of the other dads in the Google interactive rotation are white, so unless our black dad is fixing the dog house, he comes out looking like he’s in a sequel to the Rosey Grier film The Thing With Two Heads. If you’re any other non-white American, you’re completely out of luck. But after years of solo white dads on Google doodles, it’s a start.

Republicans, at least, will be happy to note that there’s a Mitt Romney* dad:

Here are examples of all of the Google dad-heads from the interactive doodle, plus the rest of Google’s Father’s Day doodles, dating back to 2000:

*Mitt Romney was the 2012 Republican presidential candidate. He lost.