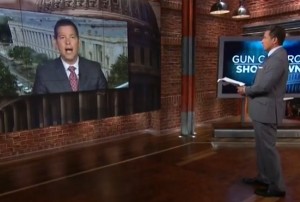 As House Democrats continue their protest over gun control in the wake of the Orlando mass shooting, Republicans continue to insist that guns have nothing to do with the tragedy, and that it’s all about terrorism. On Thursday morning’s edition of CNN’s New Day, anchor Chris Cuomo handily buried one Republican congressman with that very talking point.

In response to the House Democrats’ protest, Rep. Sean Duffy (R-WI) suggested a “sit-in at the White House” to demand that President Obama take actions against ISIS on the basis that “our generals say we could take ISIS out in weeks, if not months,” as well as the familiar demand that Obama adopt a certain three-word phrase.

Cuomo pounced on Duffy, calling out the hypocrisy of demanding actions that Republicans are unwilling to take themselves:

If you want to have a sit-in at the white house, go there, brother. I don’t know what you’re asking for that isn’t done right now. The generals do say they could take out ISIS, but we know what they’re asking for. They’re asking for boots on the ground, and you’re part of a congress that won’t even have a vote on the authorization for use of military force against ISIS. What about that?

Duffy’s assertion that the 2001 AUMF gives the President all the authority he needs is dubious, at best, but his claim that President Obama’s new AUMF request limits his power is laughable. President Obama has already stretched the limits of the 2001 AUMF beyond any recognition, so all the new one really does is update the name of the enemy, and impose the following imaginary limitation: “The authority granted in subsection (a) does not authorize the use of the United States Armed Forces in enduring offensive ground combat operations.”

A first-year law student could drive a thousand tanks through the holes in that sentence, but to Cuomo’s point, Congress hasn’t even tried to send up their own magical AUMF. Hell, they could even torture their resolution’s acronym into spelling out “RADICAL ISLAMIC TERROR” if they wanted to, but they don’t. They don’t because the minute they do, they own a piece of whatever military quagmire they’re shrieking about getting us into from the sidelines.

Interestingly, Duffy went on to claim that his own constituents “know the threat isn’t guns. they know the threat is radical Islamic terrorism,” even though Wisconsin has been the site of exactly zero Radical Islamic Terrorism™ attacks, but has been the site of a raft of mass shootings, including the 2012 massacre at a Sikh temple that killed seven. Maybe Duffy’s constituents are getting bad information from somewhere.