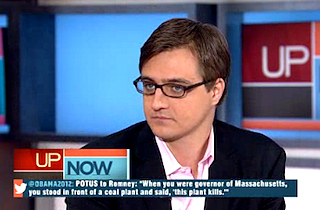 According to Eidelson, Hayes met “privately” with the workers at the offices of Writers Guild of America–East, which is in a protracted battle with Peacock Productions. WGA-E accused NBC of engaging in “a textbook anti-union campaign that you would see at companies like Wal-Mart,” and was quick to point out that the alleged union-busting ran counter to MSNBC’s professed support of workers’ rights. Peacock has produced documentaries for the cable news channel.

“We presented our case to Chris Hayes and he understood what we were dealing with,” one worker told Salon. “I don’t know whether Chris Hayes will do anything in support of us—you know, of this campaign. I have no idea. But he listened and he heard us. And you know, I appreciate that he took the time to listen.” (Hayes did not respond to Salon’s request for a comment.)

The workers, backed by Moveon.org and the AFL-CIO, have sought support from fellow MSNBC hosts Rachel Maddow, Ed Schultz, Lawrence O’Donnell, and Al Sharpton, none of whom have publicly spoken about the issue. In an email sent to Eidelson, in response to his request, Schultz reportedly responded by writing, “Moveon.org has never been an ally of Ed Schultz, why should I help you with a story? Give me a reason.”

[Ed. note: post has been updated to reflect that Eidelson was sent Schultz’s email per a request.]