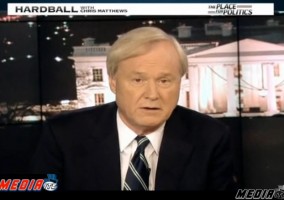 Last night Chris Matthews apologized for saying that President Barack Obama had traveled to an “enemy camp” at West Point to address the nation on the war in Afghanistan, a remark he made after Obama’s speech about US Military plans in the war-torn country. He also noted that he “skepticism, if not resentment” in the faces of those attending the speech. Video and text of his apology after the jump.

Transcript of his apology:

I have gotten tough calls from parents of cadets and former cadets at west point my saying last night the president going to speak up there to maybe the enemy camp. I was talking about the skepticism I saw on the faces in the crowd as president Obama spoke. How West Point was where President Bush went in 2002 to make his most hawkish speech before the Iraq war.

I have heard too many politicians say that was taken out of context to explain something they wish they hadn’t said. Let me say to the cadets, their parents, former cadets and everyone who cares about this country and those who defend it. I used the wrong words and worse than that i said something that is just not right. I deeply apologize.

Those who watch me regularly probably got the military up at west point was a skeptical audience for Obama given his strong position in Iraq. I was wrong to make that conclusion based on the lack of applause and apparent enthusiasm.

Cadets, one former cadet and a friend of mine told me cadets are not supposed to show reaction to a speaker. he reminded me soldiers in training want wars to be fought effectively and ended as quickly as possible. I had no reason to assume the cadets at west point are more hawkish than the president.

People who have watched me over the years know I think of my strong devotion to this country and strong gratitude to those who serve. Because our military is so good and true I want the civilians who make the policy to get them right in this country’s best possible interest. It is something we are allowed to argue about in this country. Whenever I meet someone with a service record I say thank you for your service. They know I say it and I hope they know I mean it.