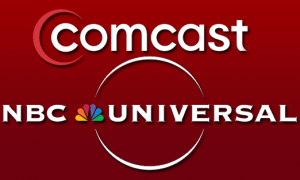 As has been rumored for awhile, Comcast and GE announced this morning they were forming a joint venture.

Comcast would own 51%, GE would own 49%, Comcast would manage and the venture consists of NBCU businesses, Comcasts’s cable networks and certain digital properties, among other things.

• Get ready for a lengthy regulatory fight.

PHILADELPHIA, PA and FAIRFIELD, CT – Dec. 3, 2009 – Comcast (NASDAQ: CMCSA, CMCSK) and General Electric (NYSE: GE) announced today that they have signed a definitive agreement to form a joint venture that will be 51 percent owned by Comcast, 49 percent owned by GE and managed by Comcast. The joint venture, which will consist of the NBC Universal (NBCU) businesses and Comcast’s cable networks, regional sports networks and certain digital properties and certain unconsolidated investments, will be well positioned to compete in an increasingly dynamic and competitive media and digital environment.

The combination of assets creates a leading media and entertainment company with the proven capability to provide some of the world’s most popular entertainment, news and sports content, movies and film libraries to consumers anytime, anywhere. The joint venture will provide consumers the broadest possible access to content, and support high-quality, award-winning content development across all platforms including film, television, and online. It will be anchored by an outstanding portfolio of cable networks and regional sports networks that will account for about 80 percent of its cash flow, including USA, Bravo, Syfy, E!, Versus, CNBC and MSNBC. The joint venture will be financially strong with a robust cash-flow-generation capability.

Under the terms of the transaction, GE will contribute to the joint venture NBCU’s businesses valued at $30 billion, including its cable networks, filmed entertainment, televised entertainment, theme parks, and unconsolidated investments, subject to $9.1 billion in debt to third party lenders. Comcast will contribute its cable networks including E!, Versus and the Golf Channel, its ten regional sports networks, and certain digital media properties, collectively valued at $7.25 billion, and make a payment to GE of approximately $6.5 billion of cash subject to certain adjustments based on various events between signing and closing.

Comcast Chairman and Chief Executive Officer Brian Roberts said, “This deal is a perfect fit for Comcast and will allow us to become a leader in the development and distribution of multiplatform ‘anytime, anywhere’ media that American consumers are demanding. In particular, NBCU’s fast-growing, highly profitable cable networks are a great complement to our industry-leading distribution business. Today’s announced transaction will increase our capabilities in content and cable networks. At the same time, it will enhance consumer choice and accelerate the development of new digital products and services. GE has provided NBCU with a great home and has dramatically and positively transformed the business. We are honored that under this agreement Comcast would take over the stewardship of this important collection of assets and are absolutely committed to investing in NBCU and ensuring that it is a vibrant, financially strong company able to thrive in a rapidly evolving marketplace by delivering innovative programming. We are particularly pleased to be creating this new joint venture with GE and Jeff Immelt and to have their continued involvement.

“For Comcast, this transaction is strategically compelling and will generate attractive financial returns and build shareholder value,” continued Roberts. “It is also expected to be immediately accretive and will also allow us to maintain our strong commitment to returning capital to shareholders– all while increasing the scale, capabilities and value of our cable distribution, content and digital assets. Significantly, it is entirely consistent with our intense focus on value creation and our disciplined strategy of pursuing profitable growth in areas complementary to our distribution business.”

GE Chairman and CEO Jeff Immelt said, “The combination of Comcast’s cable and regional sports networks and digital media properties and NBCU will deliver strong returns for GE shareholders and business partners. NBCU has been a great business for GE over the past two decades. We have generated an average annual return of 11 percent, while expanding into cable, movies, parks and international media. We are reducing our ownership stake from 80 percent to 49 percent of a more valuable entity. By doing so, GE gets a good value for NBCU. This transaction will generate approximately $8 billion of cash at closing with an expected small after-tax gain. We have many opportunities to invest in our high-technology infrastructure businesses at attractive returns. I believe that the new NBCU will deliver value for both Comcast and GE in the future. We will give consumers and advertisers more choice and our cable and digital assets will be second to none. I am confident Brian Roberts and his team at Comcast will be great partners.”

Comcast also announced the creation of Comcast Entertainment Group (CEG), which will house Comcast’s interest in the joint venture and will stand alongside Comcast Cable, which operates the company’s traditional cable business.

Comcast Chief Operating Officer Steve Burke said, “Both Comcast and NBCU have excellent track records of integrating and growing multi-billion dollar businesses, including significant content acquisitions. In addition, we have both developed some of the country’s most popular programming and built many of the most watched and valued networks in the industry. We are confident that we’ll be even stronger together, and look forward to working with Jeff Zucker and the NBCU team to deliver the best consumer experience.”

Jeff Zucker, current president and CEO of NBCU, will be CEO of the new joint venture and will report to Burke. Zucker said, “Combining the assets of NBCU, ranging from our suite of cable properties and two broadcast networks to a legendary film studio and global theme park business, with the content assets and resources of Comcast, will enable us to continue to thrive in an ever-changing media landscape. Consumers of all of our products – on screens large and small – will have the benefit of enhanced content and experiences, delivered to them in new and better ways as a result of this transaction. This marks the start of a new era for NBCU, and I’m genuinely excited that I will be leading this wonderful organization, along with the Comcast team, at this important time in our history.”

Headquarters for the business will remain in New York. The joint venture board will have three directors nominated by Comcast and two nominated by GE.

Key Elements Of The Transaction:

• NBCU will borrow approximately $9.1 billion from third-party lenders and distribute the cash to GE.
• NBCU, valued at $30 billion, will be contributed to the newly formed joint venture. Comcast will contribute its programming businesses and certain other properties valued at $7.25 billion.

• Comcast will make a payment to GE of approximately $6.5 billion in cash subject to certain adjustments based on various events between signing and closing.

• GE will be entitled to elect to cause the joint venture to redeem one-half of its interest at year 3 ½ and its remaining interest at year 7. The joint venture’s obligations to complete those purchases will be subject to the venture’s leverage ratio not exceeding 2.75X EBITDA and the venture continuing to hold investment-grade ratings. Comcast also has certain rights to purchase GE’s interest in the venture at specified times. All such transactions would be done at a 20% premium to public market value with 50% sharing of upside above the closing valuation.

• To the extent the joint venture is not required to meet GE’s redemption requests, Comcast will provide a backstop up to a maximum of $2.875 billion for the first redemption and a total backstop of $5.750 billion.

The transaction has been approved by the Board of Directors of GE and Comcast. It is subject to receipt of various regulatory approvals, including clearance under the Hart-Scott-Rodino Antitrust Improvements Act, and approvals of the Federal Communications Commission and certain international agencies. The transaction is also subject to other customary closing conditions. NBCU has obtained $9.85 billion of committed financing through a consortium of banks led by J.P. Morgan, Goldman Sachs, Morgan Stanley, BofA Merrill Lynch and Citi. This financing is expected to receive solid investment-grade ratings from S&P and Moody’s.

Comcast and GE intend to submit regulatory applications supporting the pro-competitive and strong public interest benefits of the transaction, including how the joint venture will better meet the entertainment, communications and information needs of the American public.

“We are prepared to make affirmative commitments to ensure that the pro-consumer and public interest benefits of the transaction are realized,” Roberts said. “Today, we have announced a number of initial commitments that expand on the capabilities that Comcast and NBCU have built over the years, and the new opportunities that this combination makes possible. These commitments address the needs of various audiences and stakeholders, and we will provide additional details on these and other commitments in our public interest filing with the Federal Communications Commission.”

Teleconference and Webcast
Comcast will host a conference call with the financial community today, December 3, 2009, at 8:30 a.m. Eastern Time (ET) to discuss this morning’s announcement with Comcast Chairman and CEO Brian L. Roberts, Comcast Chief Operating Officer Stephen B. Burke and Comcast Chief Financial Officer, Michael J. Angelakis. The conference call will be broadcast live via the Company’s Investor Relations website at www.cmcsa.com or www.cmcsk.com. Those parties interested in participating via telephone should dial (800) 263- 8495 with the conference ID number 44380493. A telephone replay of the call will be available on the Investor Relations website starting at 12:30 p.m. Eastern Time on December 3, 2009 and will be available until December 8, 2009 at midnight Eastern Time. To access the rebroadcast, please dial (800) 642-1687 conference ID 44380493.

GE will also host a webcast with the financial community today, December 3, 2009, at 8:30 a.m. Eastern Time / 7:30 a.m. Central Time to discuss this morning’s announcement with GE Chairman and CEO Jeff Immelt, GE Chief Financial Officer Keith Sherin and NBCU President and CEO Jeff Zucker. The webcast will be available at www.ge.com/investors. A replay will be available later in the day on the site.

The description of this transaction included in this press release is qualified in its entirety by, and is subject to, the terms of the definitive documentation for the transaction to be filed by Comcast with the Securities and Exchange Commission on a Current Report on Form 8-K.