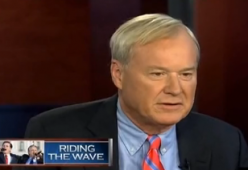 It seems media darling Jon Stewart‘s criticism of the media during yesterday’s rally has hit some nerves. Yesterday, Keith Olbermann twittered that Stewart had jumped the shark and this afternoon Chris Matthews (in anticipation of Tuesday’s election both MSNBC and Fox News more or less ran with their regular weekday lineup) sounded rather nonplussed over the idea that the media was to blame for the state of the country. Or that they should tone it down. Guest Arianna Huffington — who has lately designated herself protector of Stewart’s Sanity, in much the same way HuffPo functioned as Obama’s champion in 2007/08 (no one can accuse Arianna of not knowing what’s good for business!) — was quick to jump to Stewart’s defense.

Indeed. Well Chris Matthews was having none of that.

Ah, okay, is that what you do at Huffington Post every day, write stories about how there was no accidents on the highway last night, everybody had a good night’s sleep.

Snap! And it probably bears noting that while Matthews is many things he is not usually snappy. Meanwhile, in a valiant attempt to diffuse the situation Salon’s Steve Kornacki pointed out that this vitriol actually isn’t anything new: “The Founding Father were some of the most ugly, bitter, vindictive politicians you’ve ever seen.” Arianna countered by comparing Jon Stewart to Thomas Jefferson.

Matthews further clarified that he “really liked the rally” but the part he had a hard time with was the idea that “somebody’s going to come on and say I’m better than everybody else.” “Nobody said that,” protested Arianna. “You are,” barked Matthews.

In conclusion, after some pressing, it turns out Arianna was proselytizing to those other irresponsible people in the media that were not Chris Matthews, and for his part Matthews does not like the Birthers and is a fan of the Ground Zero Mosque. Kumbaya! Watch below.