Clearing The Air On The Politico/MSNBC Relationship (Or Lack Thereof)

Clearing The Air On The Politico/MSNBC Relationship (Or Lack Thereof) 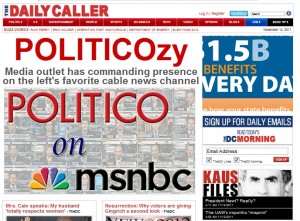 All day yesterday there was talk about a Politico/MSNBC relationship. This talk all started because of a poorly thought out, selective memory-riddled, a bridge- too-far piece in The Daily Caller by Jeff Poor. I’d hoped that someone would have come out and knocked Poor’s article down by now but nobody has so I guess I have to. I have no interest in whether Politico is a liberal publication or not because it doesn’t concern cable news. I only care about Poor’s attempt to tie Politico to MSNBC.

The gist of Poor’s argument could be summarized thusly:

Politico = Liberal + MSNBC = Liberal + Politico staffers showing up on MSNBC frequently = Liberals in bed with one another.

To support his argument Poor spent one week (!) sampling MSNBC extensively (in one week?) and combined that with the fact that FNC hasn’t had Politico people on its air since May 2010. But then Poor undermines his entire thesis thusly…

Not exclusive to MSNBC

Hang on…MSNBC has, according to Poor, had Politico reporters on 24 times in a one week time frame (which averages out to 3.1 Politico appearances per day) but it has also had its people appear on CNN and Current. Doesn’t sound like much of a Politico – MSNBC relationship to me. The fact that FNC hasn’t had Politico people on since May 2010 is an irrelevant point since that’s an FNC decision not a Politico one. And Poor’s FNC point isn’t helped any when on the same day Bill O’Reilly reaches out to…wait for it…Politico to talk about controversy surround his book. Oops.

There is no cozy relationship between Politico and MSNBC except where the world of politics and political coverage is concerned. When it’s political, MSNBC wants political writers to discuss what’s going on be it someone from The National Journal, The New York Times, or Politico. Four years ago it wasn’t Politico that was seen a lot on MSNBC. In fact four years ago Politico was essentially blacklisted from MSNBC over a period of several months because CNN was co-sponsoring a debate with Politico and MSNBC didn’t want to give Politico people any face time as a result.

And if Politico did indeed want to crawl into bed with MSNBC it wouldn’t be sending its people over to Current or CNN. It would want to cement the relationship with some sort of content sharing agreement. That’s the way you construct a beneficial relationship. There’s no money in it for Politico to be spreading itself out if the goal is to forge an identity based on ideology. It’s completely counterproductive.

Note – this post first appeared on Inside Cable News and appears here with consent.