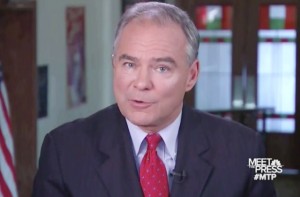 With a fully united Democratic party behind her, former Secretary of State and current party nominee Hillary Clinton has many options when it comes to using her resources and surrogates on the campaign trail.

For example, in this corner she (finally) has the endorsement of progressive champs like Bernie Sanders and Elizabeth Warren, both of whom are lightning rods of enthusiasm with their base. The Clinton campaign has long opined where best to strategically use this voice of support, and many would would argue that a “College Tour” of sorts is in order. After all, it was highly-courted millennial vote that significantly supported Sanders during the primary, and sending these two to speak to this demo is the prudent move.

Then you have Vice President Joe Biden, whose personal approval rating seems to be so high that the Clinton camp might reconsider having the two of them campaign together at all. Instead, sending Biden to the rust belt factory plants in states like Pennsylvania, Michigan, and Ohio might help steal the support from the disenfranchised middle class white male vote that largely backed Donald Trump in the Republican primary.

Then you have Tim Kaine, the Vice Presidential nominee for the Democrats who was largely unknown on the national stage until about a month ago. Many thought that it became increasingly clear how Kaine would be used: in addition to the 8-0 perfect campaign record he has in his home state of Virginia, Kaine is a fluent Spanish speaker. It is no surprise or coincidence that the first joint rally between Clinton and Kaine was held in Florida, where nearly two million Hispanics are registered to vote this fall. While not immediately clear, Kaine’s strengths would provide key support in those two states that the Clinton camp want to ensure victory in.

But now, it would seem as if the campaign is using the VP choice in a new and curious way. As POLITICO points out, Kaine has been shipped off to deep red states — places like Wyoming, Idaho, and Missouri — to make a play and make a statement that would force the ever-shifting Trump campaign to spend money on the defensive.

Today, Kaine finds himself in Jackson, Wyoming for a series of closed-doors fundraisers. To put things in perspective, the state has not gone blue since voting for Lyndon Johnson over Barry Goldwater in 1964, and its three electoral votes aren’t all too consequential in the scheme of things.

The maneuver, it would appear, is to force the Trump campaign — dealing with its own myriad of staffing concerns at the highest levels — to seriously reconsider the electoral college map. Democratic strategist Maria Cardova said, “Part of what they want to signal is that she has so many pathways to 270 [electoral votes], and the more that the campaign moves toward November the more diverse those pathways get for Hillary and the narrower that path gets for Trump.”

Even widely-assumed deep red states like Georgia and Arizona are no longer clear-cut choices for the Republican candidate. Although Georgia famously went blue for Bill Clinton in 1992 and of course for Jimmy Carter twice, it’s long considered a conservative stronghold. Hillary Clinton, however, holds a slim +0.3 winning margin in the Peach State according to the newest polling data from Real Clear Politics.

Now, pushing deeper into Republican territory, Kaine’s fundraising spree is taking him to a trio of spots that are far from traditional Democratic fundraising hubs at a time when most vice presidential contenders tend to camp out full-time in swing states rather than scouring second- or third-tier campaign finance cities.

Kaine is also expected to attend a fundraising event in Sun Valley, Idaho, a state that also hasn’t gone blue since Goldwater’s drubbing. That’s not to say that Kaine will be solely used in traditionally Republican states: he’s scheduled to fly to events in Los Angeles, Portland, Seattle, and Denver in the coming days. But after those stops, he’s painting the map red again: Little Rock, Arkansas and Nashville, Tennessee. Though, I can certainly think of at least one Clinton surrogate who might find his way to campaign in Arkansas in the near future as well.

While Republicans are still in the process of unifying around the candidates and looking for anyone at this point willing to campaign on Trump’s behalf, Clinton has the advantage of full party support behind her. It is — when compared to the situation on the right side of the aisle — an embarrassment of riches and campaign/fundraising potential. Tim Kaine (questionable enthusiasm aside) is proving himself to be a vital Swiss Army Knife on the trail, malleable enough to send wherever’s necessary to help ensure the path to 270 is as painless as possible.