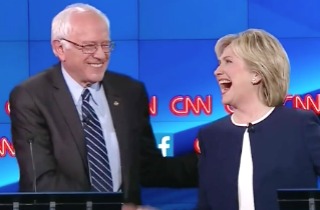 The Hillary Clinton campaign has a statement out tonight calling for an independent review over potential wrongdoing by the Bernie Sanders campaign over a breach of voter data.

For a quick refresher, there was a technical problem that led to the Sanders campaign being able to access Hillary Clinton‘s voter data. At least one Sanders staffer went through the data, and he was fired, but the DNC disciplined his campaign by cutting off their access to the party’s voter data.

The Sanders campaign is outraged and filed a lawsuit today against the DNC demanding their access back. The Clinton campaign is convinced the Sanders camp was “stealing data,” and in a new statement tonight they’re calling for an independent review of the matter.

This is the full statement:

We hope that the court will resolve this matter tonight and the Sanders campaign has access to their voter files right away, with adequate protections of our proprietary information, which we understand could be completed in short order.

As we stated earlier today, we also want a full, independent accounting of the Sanders campaign’s actions, as well as assurances that no data or strategic insight from this act of intrusion will be used by his campaign. This was an egregious breach of data and ethics.

And they’re getting backed up tonight by DNC vice-chair R.T. Rybak. He posted on Facebook that the Sanders campaign needs to agree to an independent audit, as well as “restoring the Sanders campaign full access as soon as it can be demonstrated to all parties that the information they received can’t be used unfairly going forward.”