What does Clorox make? Cleaning products. That includes bleach. Which is why, yesterday, they light-heartedly asked why bleach isn’t included in the new array of emojis Apple released yesterday with the new iOS update: 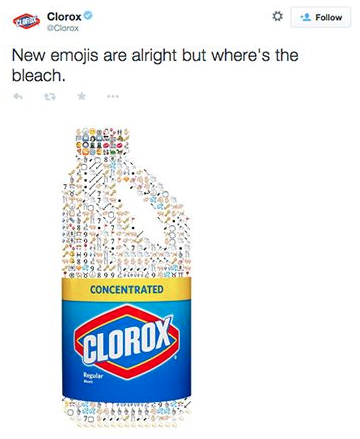 That, somehow, triggered accusations of racism.

You may be asking “What? How? Why?” Well, the updated emoji list included more racially diverse emojis (people complained there weren’t minority faces they could use to express themselves), and a lot of people thought the “bleach” comment was racially insensitive, or at least, in poor taste:

@Clorox you guys couldn't possibly think that tweet would be a good idea.

Yeah.. You deff knew what you were tweeting.. RT @Clorox: New emojis are alright but where's the bleach. http://t.co/dmZZ98XRAG

“@Clorox: New emojis are alright but where's the bleach. http://t.co/MyTfollkJe” EXCUSE ME??! Yall will never get my business again

Really @Clorox ? A bleach reference when they introduce emojis of color?

Clorox took down the tweet and ended up apologizing:

Wish we could bleach away our last tweet. Didn't mean to offend – it was meant to be about all the emojis that could use a clean up.

A Clorox spokesperson also put out a statement saying, “We apologize to the many people who thought our tweet about the new emojis was insensitive. It was never our intention to offend. We did not mean for this to be taken as a specific reference to the diversity emojis — but we should have been more aware of the news around this. The tweet was meant to be light-hearted but it fell flat.”