CNN.com Asks If America Is Dumber Than A 16 Year Old In The Most Depressing Article Ever 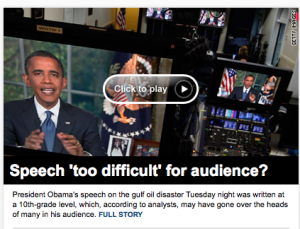 When I read on CNN.com that they had an article in which analysts describe how President Obama’s speech was written at a 10th-grade reading level and, therefore, went “over the heads” of most Americans, I was all ready to be outraged. How dare CNN besmirch the education level of my beloved US of A. However, when I read the article, I found it surprisingly interesting. After that, I found it depressing. Very, very depressing.

Admittedly, the basic thesis of the article is ridiculous. CNN contacted a “language guru” to rate the president’s speech compared to the grade-based reading levels educators use. It found that the speech rated at a 9.8th-grade level (Aw, 9.8th grade. That one was my favorite! I still remember taking little Susie Johnson to the 9.8th Grade Formal) and that was the reason why it was poorly received. Sorry, CNN, but there were many things wrong with that speech and the number of big words wasn’t exactly one of them.

However, the idea of rating presidential speeches that way interested me as did the comparisons that the analyst, Global Language Monitor president Paul J.J. Payack, made to Obama’s other speeches.

“At a micro level, the average word in the speech contained 4.5 letters, a bit longer than is typical for the former constitutional law professor, Payack said.
Obama’s nearly 10th-grade-level rating was the highest of any of his major speeches and well above the Grade 7.4 of his 2008 “Yes, we can” victory speech, which many consider his best effort, Payack said.”

As interesting as those stats are, I just couldn’t accept Payack’s theory that the speech was too “smart” for most Americans. In a great write-up of the CNN piece, Hot Air’s Ed Morrissey found the actual data and had some strong words to say about the findings.

“It’s not easy to find data on the American average reading level. A 1993 study put it somewhere between 8th and 9th grade reading level, which would have been just short of the 9.8 level found by CNN’s expert. That seems rather low, however, when the US high school graduation rate was 69.2% in 2006. Granted, not everyone who graduates from high school has a reading level commensurate with the 12th grade, but one has to assume that they do better than middle-school rankings in order to get a high-school diploma.

If they don’t, doesn’t that indict the education system? We have steadily increased federal spending on education through the Clinton, Bush, and Obama administrations. If all that gets us is an electorate who mysteriously can’t comprehend a speech given at a writing level equivalent to that of an average 15-year-old kid, then we’ve spent money on the wrong things, and let the wrong people benefit from it.”

I expected easy outrage from the CNN piece and I didn’t get that. I also didn’t get what the writer intended (an explanation for the Obama speech’s failure). What I did get, however were some very depressing facts about America’s literacy level.

Maybe I’ve become desensitized to the images of dying, oil covered birds after 60 whole days of them, but the idea that the average education level of Americans is stuck in middle school seems, to me, to be an equal-sized catastrophe as the disaster in the Gulf.