CNN Shouldn't Have Let Fiorina Bully Her Way Into Debate 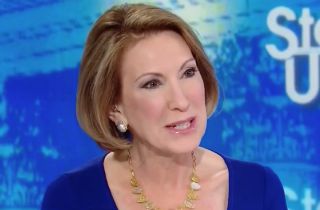 After Republican presidential candidate Carly Fiorina‘s strong showing in Fox News’ “happy hour” debate and an uptick in the polls, supporters and staffers alike were horrified to realize she probably wouldn’t qualify for the second CNN debate. The reason was simple: CNN averaged polls starting from before the Fox News debate, back when Fiorina barely registered in the polls at all.

Fiorina staffers angrily lashed out, with deputy campaign manager Sarah Isgur Flores accusing the GOP of “rigging the game to keep Carly off the main debate stage next month” and labeling CNN the “Clinton News Network.” Conservative publications like National Review wrote editorials imploring CNN to change its rules, writing “fairness to voters should matter more than fairness to candidates, and voters appear to prefer Fiorina to whichever candidate she would be bumping.”

Yesterday, CNN obliged them. While swearing up and down that they weren’t making the decision because of Fiorina, they changed the debate qualifications in a way that coincidentally only benefited one candidate. As a result of the new rules, Fiorina is almost ensured a spot in the next debate.

I don’t have any strong opinions on Carly Fiorina or her candidacy. But I do have a strong opinion on one thing; CNN’s decision is a stupid one, and they are shredding their objectivity by changing the rules for the sake of a single candidate.

The golden rule of the debates is that the hosts and moderators must never, ever give the impression that they favor one candidate over the other. Think of the outcry over Candy Crowley interrupting Mitt Romney and taking Barack Obama’s side during CNN’s 2012 debates, ABC’s decision to sideline George Stephanopoulos from moderating Republican debates, or Trump fans’ burning hatred for Fox News’ Megyn Kelly. In all of the above cases, the problem wasn’t that candidates faced tough questions, it was that they were supposedly treated unfairly in a format that should honor all candidates equally.

CNN has broken the golden rule. It caved to pressure and changed rules set months in advance in response to the outcry from those who wanted one particular candidate to do well. Unless there’s someone out there who believes their lame denial that the rule change wasn’t actually about getting Fiorina on the stage, CNN has changed the rules of the game and set a horrible precedent.

What’s more, they changed the rules in a way that favors one party. I don’t mean to write off Fiorina as nothing but a token; she’s clearly a serious candidate. But it’s undeniable that the Republican Party has a vested interest in having a woman candidate on the debate stage and having their own answer to the inevitable “War on Women” charges during the general election. RNC chairman Reince Priebus himself praised CNN for the decision (despite the RNC ostensibly not taking any one candidate’s side during the primary season, and despite the fact that having Fiorina in the debate would limit the other candidates’ exposure).

How would National Review and others react I wonder if CNN changed their entry standards because a black candidate had suddenly emerged in the currently lily-white Democratic field? And then Debbie Wasserman Schultz crowed about the decision in a press release?

Were the standards keeping Fiorina out in the first place dumb? That’s debatable (heh). I’d say it’s a matter of opinion whether it makes more sense to have a debate between candidates who can maintain relevance for a long time, or whether one should include suddenly surging candidates at their expense. With more than a dozen contenders, (and after the embarrassing flash-in-the-pan candidates of 2012) there’s really no perfect system for limiting the number of participants.

Is it unfair that a popular candidate won’t make the debates? Well, Florida shenanigans aside, was it “unfair” that George W. Bush won the 2000 presidential election but didn’t win the popular vote? Of course not: both candidates entered the race knowing the rules, knowing that winning the popular vote didn’t guarantee a path to the White House, and knowing that it meant winning X, Y, and Z states. Fiorina knew since May that it would take more than strong polling in the month of August to get into the second debate, and failed to meet that standard.

Compare her strategy to that of Ohio Governor John Kasich. Kasich, knowing that only the five most recent polls would matter for the Fox debate, acted strategically and announced his candidacy much later than other candidates. The temporary boost in the polls earned him a spot in the Fox debate over Rick Perry, earning him the momentum that he still has to this day. Turns out that for all his political savvy, all he needed to do to get into the debates was to complain incessantly… and get the RNC and the conservative media to complain for him.

Fiorina and Kasich both knew the rules. Kasich played them perfectly. Fiorina failed to generate enthusiasm when it was most important. Kasich earned a spot into the debates. Fiorina begged her way in. And CNN tossed their credibility out the window in order to blatantly give her a leg up.