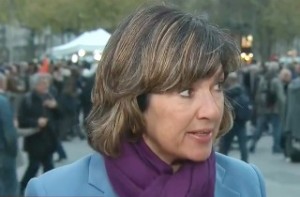 CNN’s Christiane Amanpour argued Monday that media coverage of Hillary Clinton‘s Sunday collapse and blowback against the campaign’s lack of transparency was a sexist double standard. “Can’t a girl have a sick day or two?” she asked. “…When it comes to overqualified women having to try 100 times harder than underqualified men to get a break or even a level playing field, well, we know that story.”

Throughout the entire two and half minute monologue, Amanpour comes across as less of a journalist and more of Clinton surrogate. A journalist, for example, might chafe at the notion that Clinton staffers initially told reporters Clinton was “overheated” knowing full well the real problem was pneumonia: that they lied, in other words. Amanpour’s reaction is to ask, “What about Donald Trump’s tax returns?”

The notion that sexism must be driving coverage of a presidential candidate literally passing out at a campaign event is so off-base, I won’t even bother wasting too much time responding to it. Is there anyone who believes that Donald Trump or John McCain or John Kerry or any other male politician could have been video-taped being dragged into a van barely conscious, and the footage wouldn’t receive equally nonstop coverage? This seems to be an instance of “sexism” obvious only to those who are determined to see it.

Watch below, via CNN.

Likewise, does Amanpour seriously believe that if a male politician had knowingly lied to the press corps, they’d shrug it off? This whole feigned outrage seems especially ridiculous when you consider that the campaign has already admitted that they screwed up and should have been more open about Clinton’s illness. Amanpour is now more defensive of Clinton than the actual Clinton campaign is.

But what bothers me most is how Amanpour finishes her monologue:

Considering the media outrage over Hillary failing to tell them she had pneumonia on Friday, consider the media activity shielding some great American presidents, agreeing for instance not to show these photographs of Franklin D. Roosevelt, whose polio kept him confined to a wheelchair. But did that stop his New Deal for America or winning World War II?

And then there is everyone’s favorite president, John F Kennedy. Now, he saved the world from possible nuclear Armageddon during the Cuban missile crisis, called for a new frontier in space, and generally inspired whole generations around the globe, while the press kept secret his painful struggle with Addison’s disease. Leading the world in sickness and in health—if the boys can do it, why not the women?

If I’m understanding Amanpour correctly– and I sincerely hope I’m not– she seems to suggest it was right for the good ol’ boys in the establishment press of the 30’s and 60’s to “shield” FDR and JFK’s illness from the public, because those illnesses ended up not impeding their presidency. The not-so-subtle implication of course is that the same standard ought to be applied today in Clinton’s case.

Nothing could be further from the truth. In fact, the failure of the press to inform the public of the extent of JFK and FDR’s illnesses ought to rank as two of the greatest cases of journalistic malpractice in American history.

Setting aside the collective decision by the press to conceal Roosevelt’s paralysis for decades (a deception utterly unthinkable today), there’s also the matter of the 1944 election, during which by all accounts Roosevelt was on death’s door. Entire volumes have been written about the White House’s decision to hide Roosevelt’s declining health, and the press’s willingness to maintain the illusion knowing it was a fiction. Reporters even admitted that they had known Roosevelt was seriously ill during the 1944 election following his death:

An editorial in The Washington Post noted “to be sure, many knew that the President has been in ill health…” Merriman Smith of United Press, who later wrote that he’d spent the better part of 1944 chasing down and discrediting rumors about FDR’s health– even as he acknowledged privately that the president looked increasingly “ghastly”– filled a lengthy report in which he asked: “Did President Roosevelt know that he was an ill man and that the time had come for him to husband his strength? Many of us who saw him often and traveled with him believe that he did…”

A front page story in The New York Times the morning after the president’s death (unsigned, probably written by Washington bureau chief Arthur Krock) stated flatly what nearly every journalist covering the president, including Krock, had long refused to report: “The condition of the health of President Roosevelt raised doubts in the minds of those in the capital who have had regular contact with him over the last two years, largely because official statements regarding it appeared to be in conflict with visible evidence of his physical condition.”

In short, Washington journalists knew that the American public was about to elect a man who would not and could not serve a full term and remained silent. It’s no exaggeration to say that the press failed to report literally the single most important fact about the election.

If possible, the Kennedy situation was worse. It’s hard to overstate how unbelievably unhealthy Kennedy was when he  ascended to the presidency. When historians finally opened his health records in 2002, they discovered “he could barely climb a flight of stairs and could not put on his own socks… some of J.F.K.’s vertebrae collapsed while he was still in his 30s…. J.F.K. had nine secret hospital stays during a 2 1/2-year period in the mid-1950s.”

To say nothing of the insane daily drug cocktail Kennedy was on. “Steroids for his Addison’s disease, pain-killers for his back, antispasmodics for his colitis, antibiotics for urinary-tract infections, antihistamines for allergies and, on at least one occasion, an antipsychotic (though only for two days) for a severe mood change…” The primary physician Kennedy relied upon was little more than a celebrity quack doctor, who had his medical license stripped in the 1970’s after his patients kept dying from the drugs he gave them. Many historians have said only half-jokingly that Lee Harvey Oswald just happened to beat Kennedy’s own doctors to the punch.

Again, Kennedy’s ill health was common knowledge in Washington but the press never touched it. In an election where Kennedy barely beat Richard Nixon by less than one percent, the press committed the greatest journalistic sin of all; withholding information that could have swung a presidential election.

I’m legitimately shocked that a 21st century journalist could look at the deferential media standards of the past with nostalgia. As I understand it, our job is to inform the public of matters of importance. Once upon a time, journalists willfully chose to deceive the public for the sake of “privacy,” even when candidates were hiding something very obviously hindering their ability to do their job. Where it was their job to be adversarial, journalists instead chose collusion and the democratic process suffered.

Now Amanpour would have us do the same, but with “sexism” as the excuse instead of privacy concerns. It’s not sexist or wrong or intrusive for journalists to inquire about a presidential candidate’s health after they’ve obviously fallen ill in a public setting, or to demand transparency from public officials. It’s just called journalism.