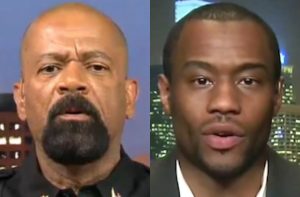 Clarke got the feud rolling by linking to a story on Hill’s comments that pro-Donald Trump blacks were “mediocre Negroes” paraded around by the Trump transition. Clarke– a Trump supporter– responded by calling Hill a “jigaboo,” an archaic term for a black man generally considered offensive.

I am tired of this jigaboo telling black people who they should be, what they should do. He’s a lackey for Democrats https://t.co/XRI5bEPo0F

That prompted a response of course, including one in which Hill “didn’t” call Clarke a variety of racial slurs (which of course was his way of doing just that).