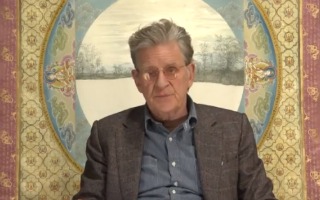 Professor Robert Thurman, a Buddhist scholar working at Columbia University, isn’t happy with our Republican Congresspeople signing a pledge to Grover Norquist. And he isn’t afraid to take that anger public.

Thurman, who was once chosen as one of Time Magazine‘s “25 Most Influential People,” has released a video calling Norquist’s anti-tax increase pledge a “seditious” and “treasonous” oath. Thurman says his purpose in making the video is so that U.S. citizens start to think more deeply about this pledge and what it means for our Congresspeople to have taken an oath to an unelected, non-governmental citizen.

Thurman’s main point is that Congresspeople take an oath to upload the Constitution of the United States, and among the promises they make are to “bear true faith and allegiance” to it. According to Thurman, pledging an oath to the U.S. government and pledging an oath to Grover Norquist can’t co-exist:

“95% of the Congressmen and Republican senators have sworn a written oath to someone called Grover Norquist and an organization called American For Tax Reform, that they will under no circumstances, and for no reason, raise taxes of any kind on anyone. And therefore, they have taken an oath to an outside organization which is not supported by the U.S. Constitution – which gives Congress the right to levy taxes, to do the work of the people through the government –but this is a non governmental organization, not elected by anybody and supported by big money people who are making money by not having to pay taxes.”

Thurman goes on eviscerate the elected office-holders and even goes so far as to question their loyalty to the American people:

Thurman also points out that Norquist’s preferred size of government is to shrunk down “to the size where we can drown it in the bathtub,” and that by supporting his pledge, the Republican Congresspeople are suggesting demolishing the government. He calls it “anarchist” and says:

“People who take that oath cannot actually serve in the government with good conscience, because their real role is to act as a mole to destroy the government; they are “starving the beast.”

Thurman ends the video calling those who have signed the pledge “unfit for office.”

Watch the full video, below: