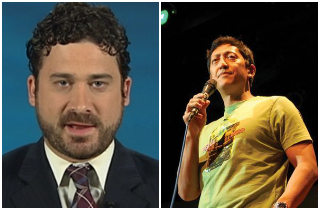 During a set at the DC Improv, Rogin rolled his eyes on Twitter over what he thought was Nainan’s hackneyed material:

Nainan must have seen or been told about the tweets—Rogin didn’t use his handle, but did hashtag #DCImprov—because things escalated pretty quickly after the set:

“Dan Nainan comes over to me and says, ‘Are you Josh Rogin,’ and I said yes and then he punched me in the jaw, then he pushed me, then he walked away and about ten seconds later he came over and punched me again,” Rogin said later. “At that point I yelled, ‘What the hell are you doing?’ Other people noticed, and they courted him off and the bouncers escorted him from the show room and we called the police.”

Nainan was then arrested:

The upside to being in a town littered with journalists? Scores of corroborating witnesses:

Other witnesses, including National Journal reporter Elahe Izadi, who had been sitting near Nainan, confirmed the encounter.

Nainan did not return press inquiries, and made no mention of the incident on his Twitter feed: