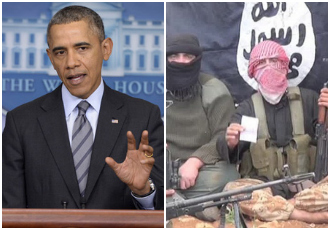 It’s safe to say that President Obama’s sixth year in office has easily been his most forgettable, especially on the international stage.

The president who figured the world outside the U.S. would simply behave to allow him to transform the country without distraction clearly didn’t anticipate the chaos increasingly unfolding overseas and at the border. Ukraine, Gaza, Syria, Libya, Iraq. It’s all falling apart, or as uber-liberal Daily Beast columnist Michael Tomasky put it in the title of a recent column: “Is It Just Me or Is the World Exploding? So Why Isn’t Obama Doing More?”

The reason? Legacy, of course. In no particular order, Mr. Obama likely wants to be remembered for three things: bringing the country back from the great recession while creating a level playing field (redistribution of wealth) in the process, providing universal health care, and bringing all troops home from Iraq and Afghanistan, no matter the consequence or cost we’re now witnessing.

The results on all three are mixed at best. The country’s economy is treading water. Negative GDP growth one quarter, a four-percent rise the next. Jobs are being created, but many more people are leaving the workforce altogether as wages actually fall, while those who are employed are working more hours just to make ends meet. Meanwhile (and ironically), the gap between the rich and poor has never been wider. As a result, Americans give the president a 39.7 percent approval rating on the economy while 55.4 disapprove (Real Clear Politics average is applied to avoid accusations of cherry-picking of polls, which is all-too-common in opinion media today).

On ACA/Obamacare, premiums and deductibles continue to rise (by double-digit percentages in some states) for millions as many lose their doctor of choice. Most importantly, the poor impression of the ACA launch was never really was erased, not by a long shot. Consequently, 39.8 percent approve, 55.1 percent don’t.

But when it comes to foreign policy, outside of killing Osama Bin Laden (which was easily the high point of Mr. Obama’s tenure), that’s where the president has fallen down most both in terms of action (or inaction) and especially rhetoric. In his own Mission Accomplished moment earlier this year, a JV Commander-in-Chief making utterly silly comments about ISIS and Al-Qaeda affiliated terror organizations being Junior Varsity themselves. Tell that to the thousands of innocent Christians slaughtered and the tens of thousands more fleeing their homes with only the clothes on their back and mountains of nothingness to save them from beheadings, rape, or both. When asked today if he underestimated ISIS, the president pointed the finger at intelligence reports and policymakers (while failing to mention himself) for not anticipating the terrorist army moving so swiftly and brutally.

RELATED: Tapper Grills WH Official on ISIS: Why Was There ‘No Serious Action’ for Months?

So finally, 60 days after ISIS captured Iraq’s second-largest city, the president takes semi-action: Limited airstrikes for humanitarian reasons. To MSNBC military analyst Barry McCaffery (formerly with the Clinton administration), the strategy is anything but:

“A lot of this doesn’t make sense. What is the mission? These are political gestures using military power. When we dropped three aircraft loads of water and food to 50,000 people in the mountains, now we’re striking ISIS artillery units, it looks to me as if a lot of this is internal U.S. politics to show we’re doing something.”

Still…taking some kind of action is a start, but here’s where the president is misreading the tea leaves. While he correctly believes the American public is tired of war, tired of the blood and treasure being spilled, he can’t seem to differentiate the degrees to which his citizens will tolerate military action.

Americans don’t mind war so much as long as our side doesn’t suffer any casualties (see: U.S. air strikes to help overthrow Gaddafi in Libya and a mostly-muted public here at home). At last check, ISIS doesn’t have an air force. So instead of limited air strikes in an effort to absolutely, positively ensure the American public we’re not about to enter Iraq War 3.0 on his watch and damage his legacy in the process, we should be doing what Mr. Obama has embraced and escalated throughout his presidency: droning the hell out of them.

It’s not like we don’t know where there are. This isn’t Hamas hiding in hospitals and schools in Gaza. ISIS? They might as well be sponsored by Target. Rain fire on them, and as Charles Krauthammer rightly suggested on Fox, arm the Kurds to the hilt in the process—who want to fight but don’t have the necessary weapons to combat ISIS, which is using our technology and equipment after taking Mosul and everything we originally supplied the Iraqi army, the Washington Generals of the battlefield. A heavily-armed Kurdish force might just get the attention of the Iraqi government in Baghdad to motivate as well.

President Obama was elected largely because he opposed the Iraq War. But in a rush to establish a legacy of being the peacemaker who got American men and women out of harm’s way in Iraq and Afghanistan, he’s clearly weakened America’s standing across the globe in doing so. Leaving a large residual force behind in each country–similar to what we did in South Korea after the Korean War, for example–was the right move to keep things relatively peaceful. But that wouldn’t look as impressive in a future presidential library, now would it?

Limited air strikes are just a baby step and clearly not enough.

As the old saying goes, you can’t kinda get a girl pregnant. With ISIS, it’s an all-or-nothing deal in terms of airstrikes.

For a little while, Mr. President, forget why you were elected six years ago. It’s a different world now, and there are different–far less riskier ways–to wage war.

A captain. A veteran quarterback.

Not the JV watching it all unfold from the sidelines.