Concha: From Sterling to Bundy, Racism More About Age than Politics

Concha: From Sterling to Bundy, Racism More About Age than Politics 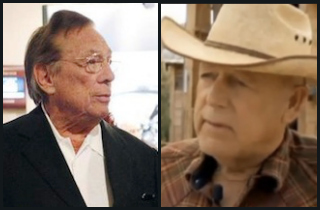 So here’s a question to consider regarding the Donald Sterling media storm that hit over the weekend:

Where was all this outrage when Senator Harry Reid talked about then-Senator Obama only using a “negro dialect” when he wanted to?

That question doesn’t come from me, but from ESPN’s Robert Smith, a former All-Pro running back for the Minnesota Vikings. It should be noted Smith is an African-American.

Mr. Reid — the Senate Majority Leader — made those comments back in 2008, during the presidential campaign as reported in the best-seller Game Change. According to authors Mark Halperin and John Heilemann:

“He [Reid] was wowed by Obama’s oratorical gifts and believed that the country was ready to embrace a black presidential candidate, especially one such as Obama — a ‘light-skinned’ African American ‘with no Negro dialect, unless he wanted to have one…'”

Reid later apologized for the remark after the book came out two years later. He was not asked to resign, nor was there anything remotely resembling the kind of backlash Sterling is feeling — and absolutely rightly so — for his recorded comments scolding his half-Latina girlfriend for bringing blacks to Clippers’ games and/or posting Instagram photos with them.

But as Smith notes, where exactly was the outrage for Reid?

Or remember when Mitt Romney said this? “In Delaware, the largest growth of population is Indian Americans, moving from India. You cannot go to a 7/11 or a Dunkin’ Donuts unless you have a slight Indian accent. I’m not joking.”

Whoops. That wasn’t Romney, but then-Senator Joe Biden back in 2006. Could you imagine the media reaction if those words did come from a Romney, a Ryan, a Rand or a Cruz?

And then there’s the time the North Carolina county precinct GOP chair (Don Yelton) actually said this of voter ID opposition in a Daily Show interview, of all places: The law “hurts a bunch of lazy blacks who just want the government to give them everything, so be it.”

Racism exists in this country, of course. But it seems to be more of a generational issue than something that pertains to one party.

Think of what Sterling, Cliven Bundy, Reid, Yelton and Biden all have in common: All are over the age of 60; all are white; all grew up in a “different time,” when racism was much more accepted. So it’s fascinating to listen to Reid this week publicly call on Republicans to disavow Bundy, whom he correctly calls a “hateful racist.” As we’ve seen, the 27-year Senator never misses an opportunity to score political points with the base, even when the hypocrisy is obvious.

Sterling, who has only donated to Democrats in the past (albeit not for awhile), was actually up for his second Lifetime Achievement Award from the NAACP. Rest assured, punishment will be swift and decisive from the NBA for what was said. And Sterling can question the authenticity of the recording all he wants — it’s a pathetic defense and the league doesn’t operate like a court of law, anyway. But the reaction wasn’t always this way in professional basketball after these kind of comments were made from an owner.

Back in 1979, Cleveland owner Ted Stepien actually declared that his 12-man roster should ideally be made up of six white players at all times. The thought came from a marketing perspective, as Stepien figured his mostly white fan base would root harder for those who looked like themselves. Guess he never witnessed the city’s worship of Jim Brown during his days with the Browns (1957-1965), nor did he notice (or care) that the league was 74 percent black in 1979 (the number is 71 percent now; the modest drop is primarily due to an influx of European players).

But because social media and cable news didn’t exist 35 years ago, Stepien wasn’t removed from the league for nearly four years after the league office finally convinced him to sell the team. As an added bonus to the new owner (Gordon Gund), the NBA even agreed to provide the struggling team extra draft picks to seal the deal. For those who don’t follow this stuff, know this: This is completely unheard of. Also know this: We won’t be talking about Sterling in the context of still owning the Clippers nearly four years from now, either.

Is racism getting worse in this country? Hard to know the answer to that. On one hand, Cliven Bundy’s and Donald Sterling’s deplorable comments have been universally condemned from left and right, blacks and whites alike. On the other hand, it feels like the divide is getting deeper — especially since the media-fueled polarization of the George Zimmerman trial and verdict.

Maybe it’s just that too many people on the extremes have been given a microphone. Shock value is more and more embraced in media, particularly the world of cable news. And nothing is easier for a segment producer to put together than a racial “debate” between the usual suspects we see every time there a story involving black vs. white that day, that week, that month.

Robert Smith wants to know where the outrage was with Harry Reid when he spoke of negro dialects.

It’s a valid question from someone with no skin the game.

But let’s stop trying to keep a scorecard on what member of which party is making a stupid racial remark this week.

As we’ve seen with the decisive dismissal of Cliven Bundy and the soon-to-be-dismissal of Donald Sterling, most Americans and almost all forms of media won’t stand for racism. And if you weren’t born somewhere before 1965, there’s a pretty good chance your thought process doesn’t exactly match theirs.

Nobody — except for blind partisans and ratings-hungry producers more interested in winning or showcasing an unwinnable and pointless argument — really cares about the voting preference of the offender.