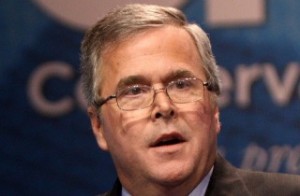 A refreshing plea came from Fox’s Greta Van Susteren at the end of her On the Record program Tuesday night.

Per her “Off the Record” commentary:

It’s hard not to like Greta in general. She’s unafraid to call out anyone–even folks at her own network–and overall is consistently unfiltered, thereby making her unpredictable going from issue to issue…a net positive and a relatively unique quality to have in the mostly-polarized world of cable news.

All of that said, it’s noble, albeit fruitless, for Greta to note that the Bush family isn’t running in 2016. Even if that technically isn’t the case, most voters will not be able to remove the Bush brand from the individual candidate–particularly as it pertains to the most recent President Bush–when making a decision to vote for Jeb or not. Yes, the former Florida governor is a departure from many in the GOP on immigration (MSNBC’s Chris Matthews even said last night that he’s the “most pro-immigration guy in either party”). And yes…he’s more articulate and comfortable with public speaking than his brother or father, which is crucial under today’s 24/7/cable news/social media microscope.

But the family name is the family name, for better of worse. And the challenge of overcoming a one-term presidency (that ended in a recession) and a two-term presidency (that ended in much worse than a recession) will be too much to distance himself from, particularly with voters seemingly less and less engaged in the finer details around any candidate these days. It’s unfortunate, but some will hear “Bush” and automatically dismiss even hearing a word more. It’s like the opposite effect of when Bobby Kennedy ran a few years after his brother was assassinated.

Yes, George H.W. Bush is highly respected by regular folks on both sides of the political aisle. And yes, Bush 43 is even rising in the polls in terms of his post-presidency favorability ratings. But given the public thirst for something different–and this applies to the challenges Hillary Clinton will have to overcome as well from many voters in her own party who would leave her in a second, like they did in 2008, the minute a more attractive candidate who could actually win comes along–the Bush brand has already been defined. In the end, it isn’t particularly cared for by the Ted Cruz Tea Party flank of the party, nor is it especially embraced by those who deems themselves independent. Net-net: Jeb’s a sound candidate with the wrong name at the wrong time.

Her sentiment is honorable. It’s also absolutely correct. But in today’s cynical world, it’s also unrealistic. The media being smart when it comes to presidential election coverage mostly entails anything but thoughtful, objective analysis. It’s a turf war instead with the usual suspects past their prime already jumping in. And the first casualty–if he gets the nomination–will be Jeb Bush.

Not because of his positions, personality or experience. But because of the brand that follows his first name…