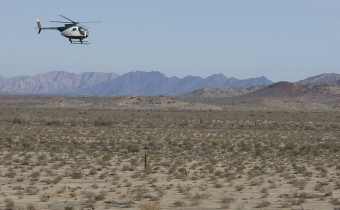 “I’m sure that President Bush thought the same thing, that he could just look at everything from up in the sky, and then he owned it after a long time. So I hope this doesn’t become the Katrina moment for President Obama, saying that he doesn’t need to come to the border. He should come down.”

That perspective comes not from right wing radio or a Republican in Congress looking to score easy political points. Instead, it is courtesy of Henry Cuellar, a Texas Democrat serving in the state’s 28th District during a recent interview with Fox’s Neil Cavuto. Rep. Raul Grijalva (D-AZ) offered up the same view to MSNBC’s Alex Wagner on Monday as well.

So the President travels to Texas Wednesday for three fundraisers, but won’t (for now) visit the border where a “humanitarian crisis” (Mr. Obama’s words) is currently unfolding which happens to involve thousands of children. The Katrina metaphor may be somewhat misplaced (1836 people died after Katrina and hundreds of thousands were displaced) but Mr. Cuellar’s question remains valid: How can any President allow himself to look so detached, so cavalier (some fundraiser tickets are north of $32,000 each) and so uncaring by visiting a state so overwhelmed and undermanned while looking for a handout?

In the past year alone, over 52,000 children have entered the United States illegally. Border agents have been reduced to paid escorts. Homeland Security measures are under siege. And despite all of this, the President still refuses to deploy the National Guard.

Optics play a critical role in politics, particularly at the national level. George W. Bush knows this all too well after that infamous and completely ill-advised photo was released of him peering down over a devastated New Orleans (while returning from vacation, no less). Audio can be devastating as well, as no employee will ever be told he or she is doing a heckuva job again without somehow perceiving it as an insult.

President Obama seemed to learn from Katrina given his rapid reaction to Sandy (visiting two days after the storm as opposed to Mr. Bush finally getting to the Gulf Coast four days after the fact). But lately, the Commander-in-Chief has been more about being The Fundraiser-in-Chief. If you recall, the President went to Chicago for a fundraiser after the VA scandal exploded just before Memorial Day weekend. He did the same by flying to Las Vegas one day after the Benghazi terror attack. Bad optics on both counts.

Overall after tomorrow, Mr. Obama has headlined 33 fundraisers this year alone and 53 in the past 18 months. By contrast, according to a May interview with The Washington Post by Meredith McGehee, policy director for the Campaign Legal Center, Ronald Reagan’s total number of fundraisers in his entire second term “was in the single digits.” And it’s not like the 40th President was unpopular and couldn’t raise a few bucks.

And at last check, Presidents can’t serve more than two terms as per the 22nd Amendment. So why the need to headline over 50 fundraisers since being re-elected 20 months ago? Why open himself to such easy criticism from both sides of the aisle?

Texas will be front and center in the world of cable news on Wednesday.

The President still has a chance to change his mind.