Conclusion: There Are No Serious Ideas Left On The Right
video

Conclusion: There Are No Serious Ideas Left On The Right 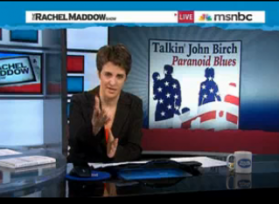 This is starting to feel like the beginning of a backlash. In a post yesterday that grabbed a lot of people’s attention, the Atlantic’s Marc Ambinder questioned whether the Republicans had in fact gone mad:

Mainstream conservative voices are embracing theories that are, to use Julian Sanchez’s phrase, “untethered” to the real world…I want to find Republicans to take seriously, but it is hard. Not because they don’t exist — serious Republicans — but because, as Sanchez and others seem to recognize, they are marginalized, even self-marginalizing, and the base itself seems to have developed a notion that bromides are equivalent to policy-thinking, and that therapy is a substitute for thinking.

One wonders if, as we get closer to the midterms and no rational (i.e. electable) voices begin to emerge from the right, and the nation gets uneasy about laws being passed like the one in Arizona, whether this isn’t going to become a wider spread meme among ‘serious thinking’ Republicans fueling some sort of backlash on the right against the likes of Beck and Limbaugh.

Meanwhile, in the same post Ambinder also posited that the only journalists currently doing “trenchant” work came from the left (i.e. Rachel Maddow, Keith Olbermann, Glenn Greenwald, Ezra Klein, HuffPo). Last night one of those “trenchant” journalists tackled the undermining of the conservatives by the fringe in her own particular way. Rachel Maddow, apparently exhausted by having lies told about her in fundraising letters (the latest is from the John Birch Society) announced that she is looking into starting a foundation to license lies about herself that might prove useful for conservatives looking to raise cash. The only caveat? She wants a cut of the profits. On a serious note, Maddow suspects the conservative embrace of the fringe is a result of the lack of gatekeepers in the party: there is no William F. Buckley, no William Kristol, and, as a result, no serious ideas left on the right. Sounds like a campaign platform for an enterprising Republican. Video below.