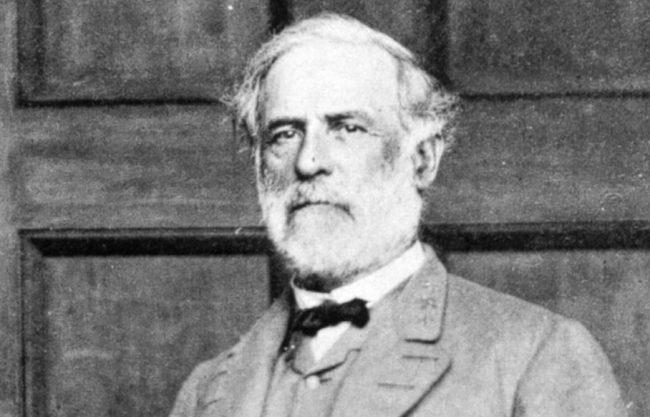 During that infamous press conference in Trump Tower, yesterday, the president spoke darkly of a slippery slope. Sure you could take down that statue of Robert E. Lee — but where would it end?

“I wonder is it George Washington next week and is it Thomas Jefferson the week after? You know, you really do have to ask yourself where does it stop? asked Trump. “You’re changing history, you’re changing culture.”

And it’s true. Washington, Jefferson and dozens of other founding fathers were slave holders. In that respect they were no different than the Confederate leaders whose statues sparked protests in Charlottesville and around the country.

But Trump is horribly wrong to conclude that our monuments to Washington and others may be in jeopardy if we lose Robert E. Lee. While there will likely always be social justice warriors to protest Washington, or Jefferson or racist sushi, there is a critical distinction that serious people should make that puts Lee and his friends in a very different category.

In a word — Treason.

Lee, Stonewall Jackson, Jefferson Davis, Alexander Stephens and the rest of that seditious brood aren’t monsters in our historical consciousness because they were slaveholders, but rather because they waged a treasonous war against their own people in order to keep slavery going. Their efforts to protect that most “peculiar institution,” was ultimately not conducted at the ballot box but through armed conflict. After peacefully losing the 19th century version of the culture wars with Abraham Lincoln’s election, they chose violence over the graceful acceptance of progress.

Slavery is obviously a monstrous evil, but it would be both unfair and unenlightened to judge historical figures — George Washington or Robert E. Lee — solely by the moral standards of the present day.

Simply put, there was a time in the United States when if you were rich and white you probably owned slaved. Slavery was an industry and slaves were the products bought and sold in that industry. Awakening public consciousness to the validly of black personhood was a slow and painful process which unfolded over hundreds of years. The arch of the moral universe may bend toward justice — but it sure doesn’t start anywhere close to it.

In fact, since we rarely get an opportunity to explore anything beyond 140 characters, it’s also worth noting here that at the time Washington and Jefferson owned slaves, it was a widely accepted practice around the world, endemic to Asia, the Middle East and even Africa. The evils of slavery are often condemned but we rarely hear about the African leaders who eagerly sold their enemies to white slave traders. It was a despicable business for them too.

In 2000, a delegation from the west African nation of Benin, issued an emotional apology for their ancestors involvement in the slave trade, during a visit to Washington D.C.

“We cry for forgiveness and reconciliation,” said Luc Gnacadja, then-minister of environment and housing for Benin, the Chicago Tribune reported. “The slave trade is a shame, and we do repent for it.”

Morality too is a continuum. There may come a time hundreds of years from now when Americans view eating meat with comparable moral indignation. There’s already a good amount of philosophy working toward that end. I don’t think most of today’s Confederate statue warriors would want the achievements of Barack Obama diminished simply because he was known to enjoy a good bowl of chili. Stop. I am in no way comparing slavery to eating meat, I am simply making a point about the future.

As a Jewish person — I can speak to this issue with some authority. I don’t let the anti-semitism of earlier generations prevent me from celebrating their worthy achievements. I don’t let Shylock ruin Shakespeare and Wagner’s operas remain as lovely as before. Even the anti-semitism of celebrated children’s author Roald Dahl didn’t stop my mother from reading me Charlie and the Chocolate Factory when I was six.

If Jewish people demanded the condemnation and ostracism of everyone in history who held anti-semitic views, we’d scarcely be able to leave the house.

When I look at that statue of Robert E. Lee, I see a slave holder, but first and foremost, I see a man who aided in –even led — the slaughter of more than 600,000 Americans. He didn’t just own slaves, he killed his own people to maintain that institution. Now in 2017 another American, Heather Heyer, is dead as a result of the Civil War’s long tail. To celebrate the treason of Lee and his friends with public monuments is a grievous insult to the patriotic Americans who died to save our nation.