Conservative Media Take Another Shot At Gibbs On Berwick Appointment 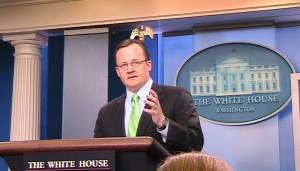 After falling prey to a particularly adept Robert Gibbs Jedi mind trick last week, CNSNews reporter Fred Lucas waded into the fray again at yesterday’s briefing. This time, in quizzing Gibbs on the recess appointment of Donald Berwick, Lucas formed a tag-team with Human Events’ John Gizzi, but he ignored the advice I gave him last week: “Next time Gibbs asks you a question, say ‘No comment!'”

Here’s the exchange, which also features assists from Major Garrett and Chuck Todd:

John Gizzi: Thank you, Robert. You point out frequently the differences between this administration and the previous administration. With the latest recess appointment, the obvious question is, why do you simply not wait for the confirmation process to go through and submit it to a Senate when they schedule a hearing before the appropriate committee and —

And then one simply wonders why we’ve waited 10 months. The health care law —

John Gizzi: So you’re saying the Senate was too slow on Berwick, is what it is?

MR. GIBBS: I will tell you, there are those in the Senate that had no intention of dealing with this nomination other than to play the political game —

Chuck Todd: But how do know — are you that cynical of the process already that you don’t even want to see it play its way through?

Fred Lucas: Did the President ever take —

Fred Lucas: How many?

MR. GIBBS: How many? Zero. Zero. And guess what, both of you knew the answer to that.

Fred Lucas: Did the President ever ask — Chairman Baucus for a hearing?

Fred Lucas: Did the President ever ask the Chairman for —

MR. GIBBS: Not to my knowledge.

Q Robert, on Israel and Iran —

John Gizzi: Excuse me, Robert. How can you complain then about the process when the President —

MR. GIBBS: Let me finish my answer — before this is taken up.

Major Garrett: Well, why not have a hearing where all of that can be decided in July and if there’s a blockage, a recess appointment in August?

MR. GIBBS: Because — because, Major, we’re not going to —

Major Garrett: What you just described would not be affected by that. He’d still be in place.

MR. GIBBS: Absolutely. What’s today? July 12th — we got three weeks until August. We’re going to implement the law, Major. We’re not going to wait around —

Major Garrett: If you had a hearing in July and a recess appointment in August —

Q Robert, I hate to get away from the excitement, but —

I think Gibbs’ point (that the Senate’s record thus far indicates that even given a hearing, Berwick’s confirmation would remain stalled) is a good one. Since almost everyone agrees the guy is more than qualified, the practical impact of the recess appointment is to deny the American people the chance to watch Republicans kick around some red meat. As Gibbs also pointed out last week, Berwick’s remarks aren’t in some secret comment book. The media, right-wing or otherwise, is free to cover them, and I think Gibbs is saying that the White House feels no need to abet that.

The flip side to that is that the recess appointment comes with a cost, in the form of this kind of criticism. Gizzi overreaches by comparing Obama to Bush, who used the recess to appoint (among many others) John Bolton as UN Ambassador. Berwick would surely have been confirmed, Bolton not. This has the appearance of circumventing “advice and consent,” against which Gibbs makes a compelling argument. However, it is a circumvention of the process, one that will make it tougher to argue against any of President Palin‘s recess appointments (“The Todd” for Ambassador to Russia, anyone?).

This is where I think Gibbs’ answer falls short. He misses an opportunity to draw the lines on when recess appointments should be used. This is likely due to an unwillingness to restrict future recess appointments, but without it, we’re left to figure it out for ourselves.