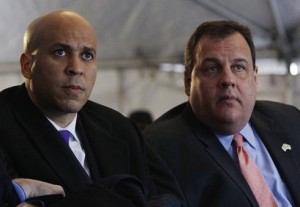 Newark mayor Cory Booker is reportedly weighing a challenge to New Jersey governor Chris Christie when Christie runs for reelection next year. According to PolitickerNJ, some state Democratic officials see Booker as the only viable candidate to run against Christie in the gubernatorial race. Both New Jersey politicians will be getting a national platform when they speak at their party’s respective conventions over the next two weeks.

Christie will be delivering the keynote address at the Republican National Convention next week, while Booker will be speaking at the Democratic National Convention the following week “to present the party’s platform.” A source in the New Jersey Democratic party tells PolitickerNJ that following Christie’s speech, they want to be able to recruit a counterpoint “who can present more than token opposition” in the upcoming gubernatorial race.

Booker may end up being that counterpoint, because recently he has been meeting with party officials throughout the state with possible plans to run against Christie.

Booker and his political consultant Mark Matzen are meeting face-to-face with county chairs and making it known that Booker is weighing a run for governor and plans to decide by December, according to party sources.

Some Democrats see Booker as the only 2013 option against Republican Gov. Chris Christie.

By virtue of his fundraising ability, charisma and potential to transcend a fragmented state party, others see him, at the very least, as the preferred nominee.

When Christie was asked earlier this week about potentially accepting a cabinet position in Mitt Romney‘s cabinet, the governor dismissed the idea and said he intends to stay in New Jersey.